The EPA's Draft Inventory of U.S. Greenhouse Gas Emissions and Sinks, 1990 - 2012 was released on February 21, 2014. I have been looking it over and have noted some things about it that I wanted to comment on here. I may make further postings in the future as I work my way through it.

The Executive Summary has some interesting figures and numbers. For instance, there is this pie chart of 2012 greenhouse gas emissions by gas (CO2 equivalent) 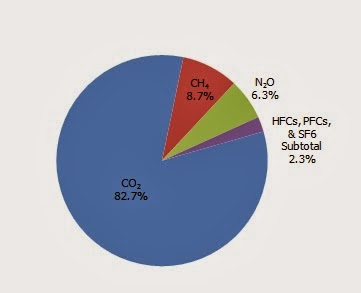 But, this is the one I found the most interesting, the greenhouse gas emissions by gas, over time:

The significance of this chart is the downward trend in greenhouse gas emissions in this country. Total emissions and emissions of CO2 are both down to levels not seen since before 1994. This is a very good trend. I have yet to see it specifically stated in this report, but I read elsewhere that this was occurring due to the greater use of natural gas versus coal for electrical plants. With all of the fracking going on, there is a surge in natural gas production, so this trend will hopefully continue. The report also states that methane emissions have decreased by 10.7% since 1990.  Methane is 23 times more potent as a greenhouse gas than CO2 is, so this is also good news.

There is also bad news.


The report is very long (the Executive Summary by itself is 27 pages) and, as you can imagine, is filled with lots of numbers. I will sort through it and post any interesting tidbits I find.


Posted by Dialogues on Global Warming at 4:59 PM