CO2 Is Not Dangerous

Jason JonesJuly 10, 2014 at 12:10 PM
Mr. Keating... my submission on Page IV is to be considered ALONG with the submission in the provided LINK. The reason I resubmitted is due to the fact that you had requested the "Scientific Method" in refuting the premise of "Man Caused Global Warming". I did not want there to be any "loophole" of claiming that my submission was not in the "Scientific Method" format. The submission here on Page IV is purely and undeniably in the proper format utilizing proper scientific methodology. I do reference my linked article which should be used as an additional "Background Research" portion of the submission! Thanks!


Well, we started right off the bat with a false statement:


From August to February we undergo SEVERE “climate change” do we not? After all, going from 98 degrees on Aug. 20 to 15 degrees on Feb. 8 is pretty severe, yes?


Moving from August to February is just seasonal changes. Climate is long-term, not seasonal. Now, if you want to discuss the average of those changes over a period of time, then you would be discussing climate. And, if we found that those averages were changing from one time period to another, we would have climate change. And, if we found that those changes were caused by man-made effects, then you would have man made climate change.

But, the challenge is directed to people who claim global warming is not real and they can prove it. By that statement, they are demonstrating they understand what the term 'manmade climate change' means.

You state, correctly, that man made emissions of greenhouse gases has expanded exponentially over the last 75 years. Here is a chart of the growth of just CO2:


This graph shows the rate of emissions was rising pretty steadily until we hit about 1950 when the rate of growth exploded. The growth rate continues to increase and world wide emissions are now estimated to top 35 gigatons per year. What is not included in this graph is the fact that nature can absorb around half of our emissions.

Comparing the two we see that the late 1940s corresponded to the end of a long-term warming trend, before a cooling trend started and continued into the 1970s. But, even in the 1960s we can see the cooling trend had stalled. Then the temperature sky rocketed beginning in the late-1970s. But, that is only part of the story. Look at the world heat index:

There are many errors in your statistical analysis. The first being we are discussing 'global warming'  and not the warming of four individual locations. So, that point alone invalidates your work.

The next error you made is to suppose that man made global warming means that ONLY man made emissions are resulting in a changing climate. There are natural variations in the climate that are well documented. In fact, they are so well documented we know that these natural variations would result in a naturally occurring cooling period if we were not here. Nature absorbs about half of our current CO2 emissions, currently about 18 billion tons per year. By your count, the amount of emissions during the years you selected would have been mostly absorbed by nature and the CO2 content of the atmosphere would have gone up only marginally.

Here is a plot of CO2 levels in the atmosphere since 1958. Pre-industrial levels are quoted as being 280 ppm. This data shows the 1958 level at about 315 ppm. That represents a 12.5% increase over pre-industrial levels. The increase over 1949 levels would be considerably smaller. Certainly not the 153% increase you quoted. We can use this graph to get an estimate by calculating the increase between 1960 and 1970. Since the rate of increase is going up, we know the increase between 1948 and 1958 would be no more that that increase. 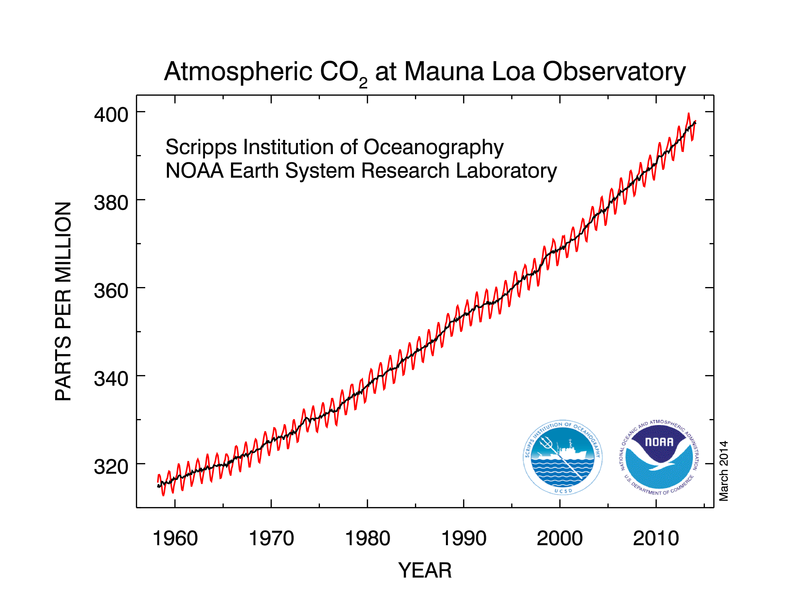 So, you took some selected cities and some selected dates to prove your point. This is what is known as 'cherry picking.' Tell me, why didn't you pick dates that are in the time period where we say man made global warming has been taking over? Why not compare temperatures between any two years between 1978 and 2014? You could have even picked the cherished 1998 that you deniers love to cherry pick as a starting point. What I'm guessing is that you did and you found the results did not fit your pre-conceived conclusion, so you rejected them and went fishing until you found what you wanted.

In any event, cherry picking data for a few cities and a couple of dates does not provide any evidence concerning man made global warming, either for or against. So, you did not provide any scientific evidence.

Now, on to your 'paper'. I always love the way deniers accuse climate scientists of being 'alarmists' and then follow that up with statements such as your claim that climate science is all about taking billions of dollars away from people. All the while, you are making these statements without a shred of evidence. The real story? It is estimated climate change is costing the world economy over a trillion dollars a year and killing nearly 400,000 people every year. That is what is going on right now, not at some time in the future. Just look at California. It is estimated the ongoing drought is costing the state $2.2 billion and 17,000 jobs. And, the people losing those jobs are the ones that can afford to lose their jobs the least. And, yes, much of the drought can be blamed on global warming. Why didn't you mention any of that in your 'paper'?

So, let's talk about this paper of yours. You begin with the statement that CO2 is two-thirds oxygen and one-third carbon. Then you ask, 'What is so dangerous about carbon? .... This is science, pure and simple.' Surely, you are not really trying to make the case that CO2 is harmless. I sincerely hope you are not advocating that, since carbon and oxygen are harmless, CO2 is therefore harmless. What about all the people that suffocate from too much CO2? And, if CO2 is harmless, then surely CO is also harmless and it is just a scam of the public that they are encouraged to buy carbon monoxide detectors for their homes. By your line of reasoning it is just an industry to take money away from poor people. Pure and simple.

As for the rest of your paper, it is pretty amazing that you rant and rave about the lottery being a tax on the stupid and you go on about how people need to stop being uneducated. You say proving AGW is just a matter of simple math, and then you get it all wrong. The worst part is, I had to read this entire thing just to find out you didn't even present any scientific evidence.

The diatribe you went into about the average temperature translating into the daily temperature is so terrible that I need to address it.

Take a look at this graph: 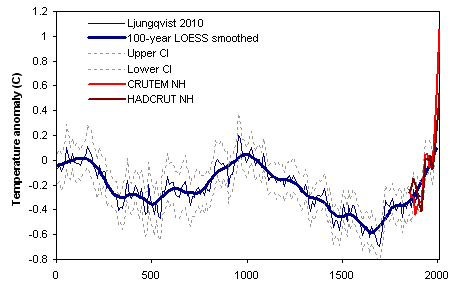 Take a look at this one: 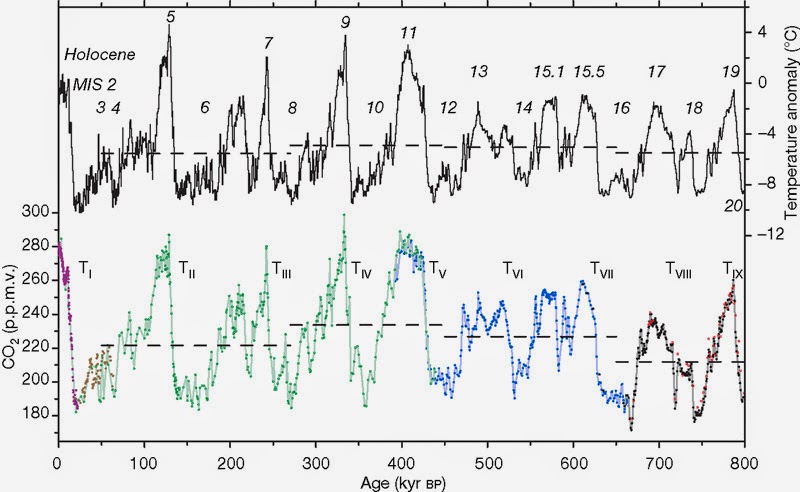 This is a similar plot, except it goes back 800,000 years instead of 2000. Today is on the left side in this graph. The big dip just to the right of today is the last ice age. Notice that it is only 6 degrees C colder than today. So, the average temperature during the last ice age was all of 11 degrees colder than today's average. Mr. Jones will tell you that is nothing to worry about. Eleven degrees? It changes that much between dawn and noon every day.

Oops, that's the part Mr. Jones never mentioned. Averaging takes out all of those daily variations. Given a large number of a given date (June 11th, for instance), the daily ups and downs will average out. In order to have an average temperature that is different than that long-term average, you would have to have temperature extremes far greater than the change in average. An eleven degree average difference would result in daily temperature changes of many tens of degrees. In this case, enough to take a continent covered with a mile-thick sheet of ice and melt every bit of it.

Mr. Jones then goes into this silly and senseless math exercise of trying to make all of the world's fossil fuel emitters into one, big pollution pipe. His argument is that this pipe is so small compared to the size of the planet that it can't possibly make a difference.  Then, he implores people to accept this as common sense and to stop being uneducated.

In response, I would just point out the Keeling curve I included above showing how we have increased the amount of CO2 in the atmosphere by over 40%. Apparently, that big pollution pipeline is fully capable of changing the planet.

In any event, the paper had no science in it and anything that approached being a scientific argument above has been debunked.

You did not prove man made global warming is not real.


Posted by Dialogues on Global Warming at 11:58 PM