There Is No Average Temperature

This submission is one that I received via the USPS from Robert Sammon. 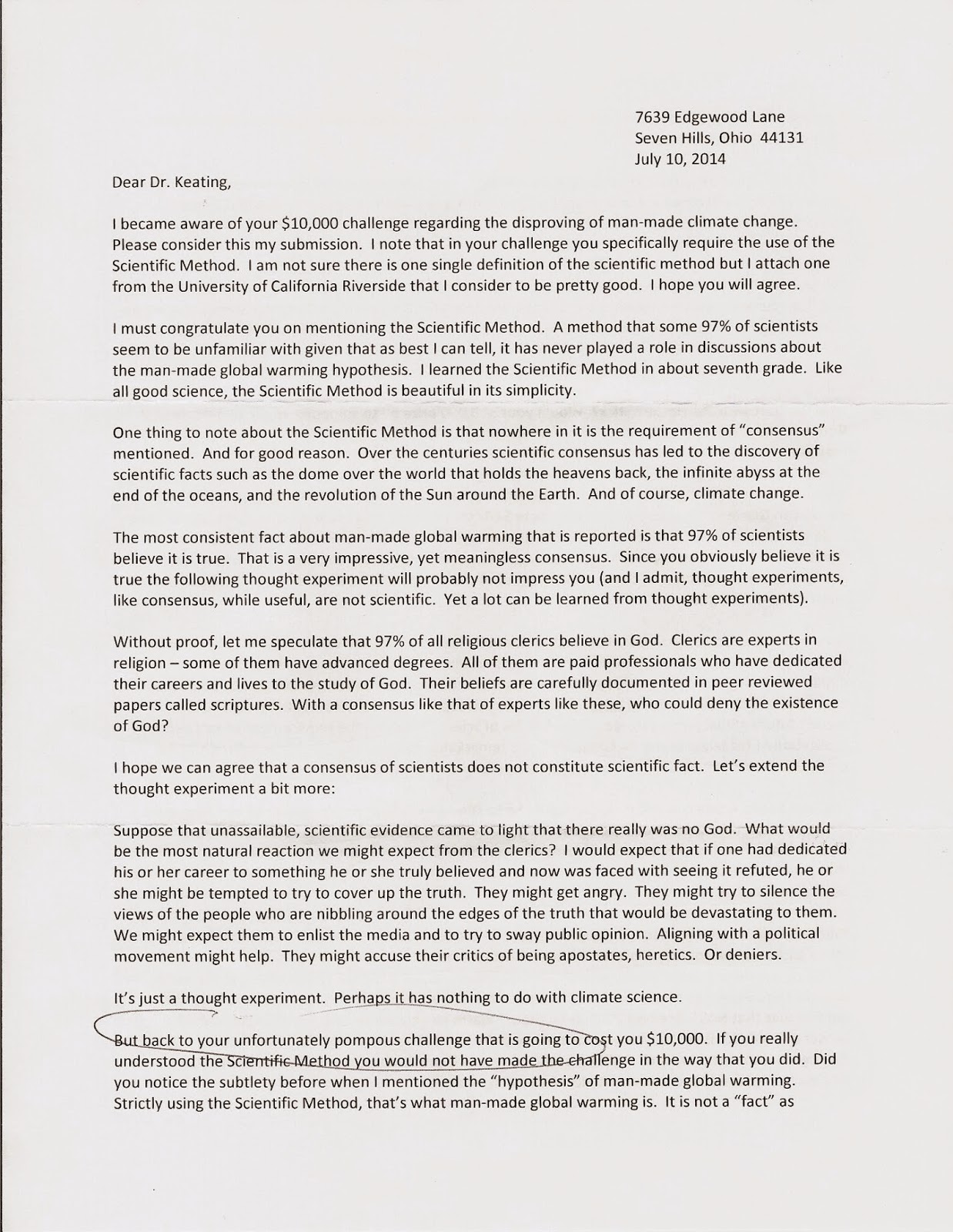 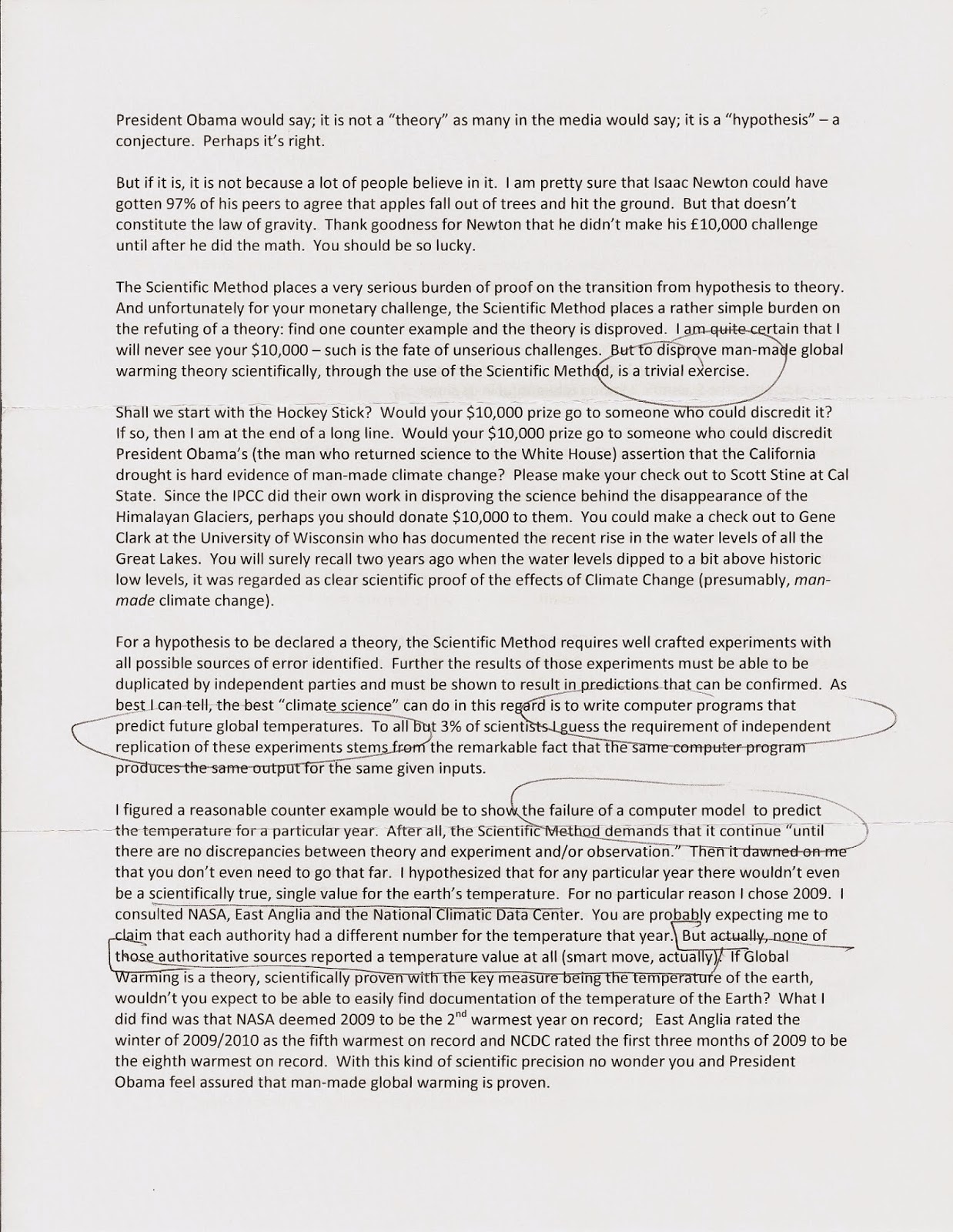 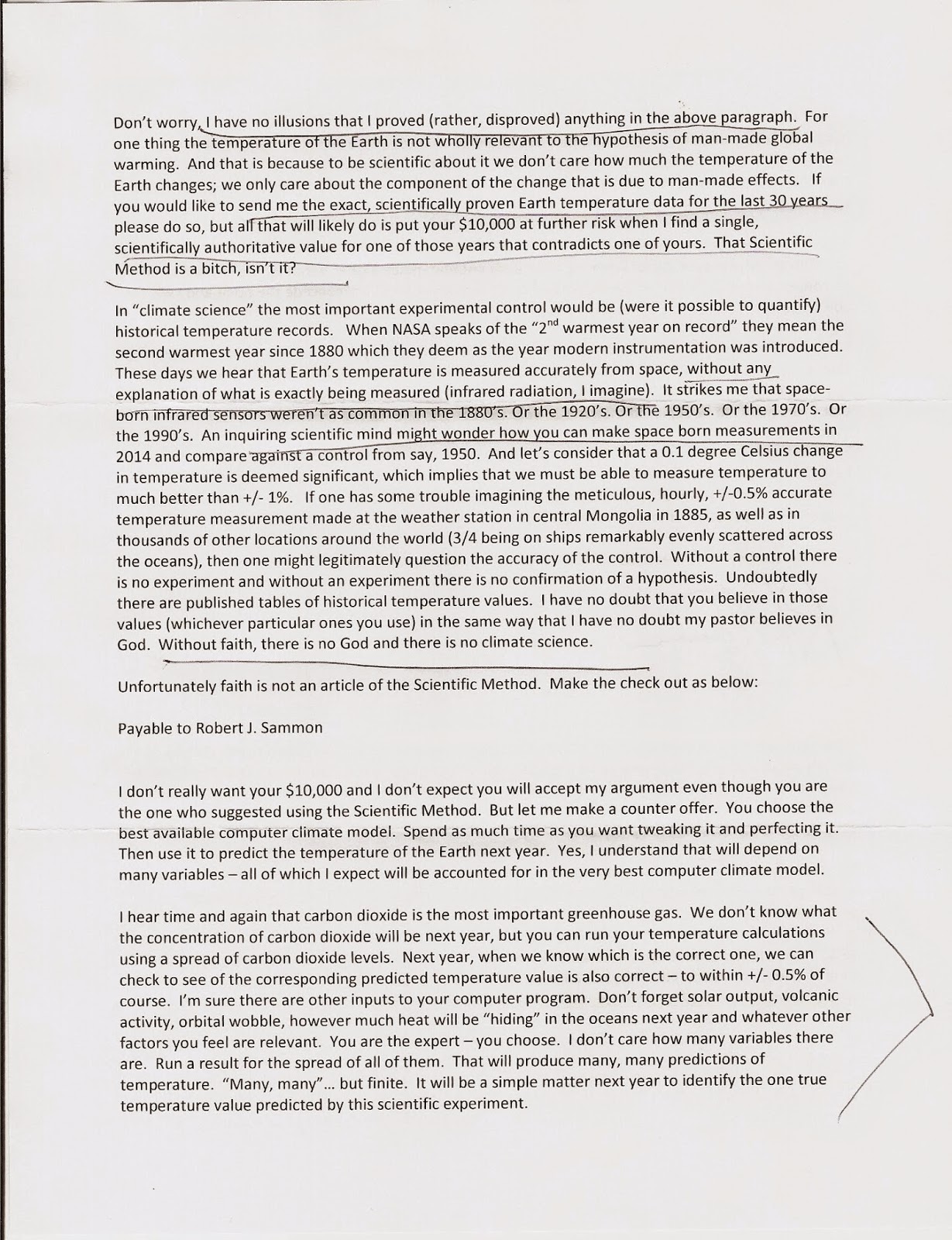 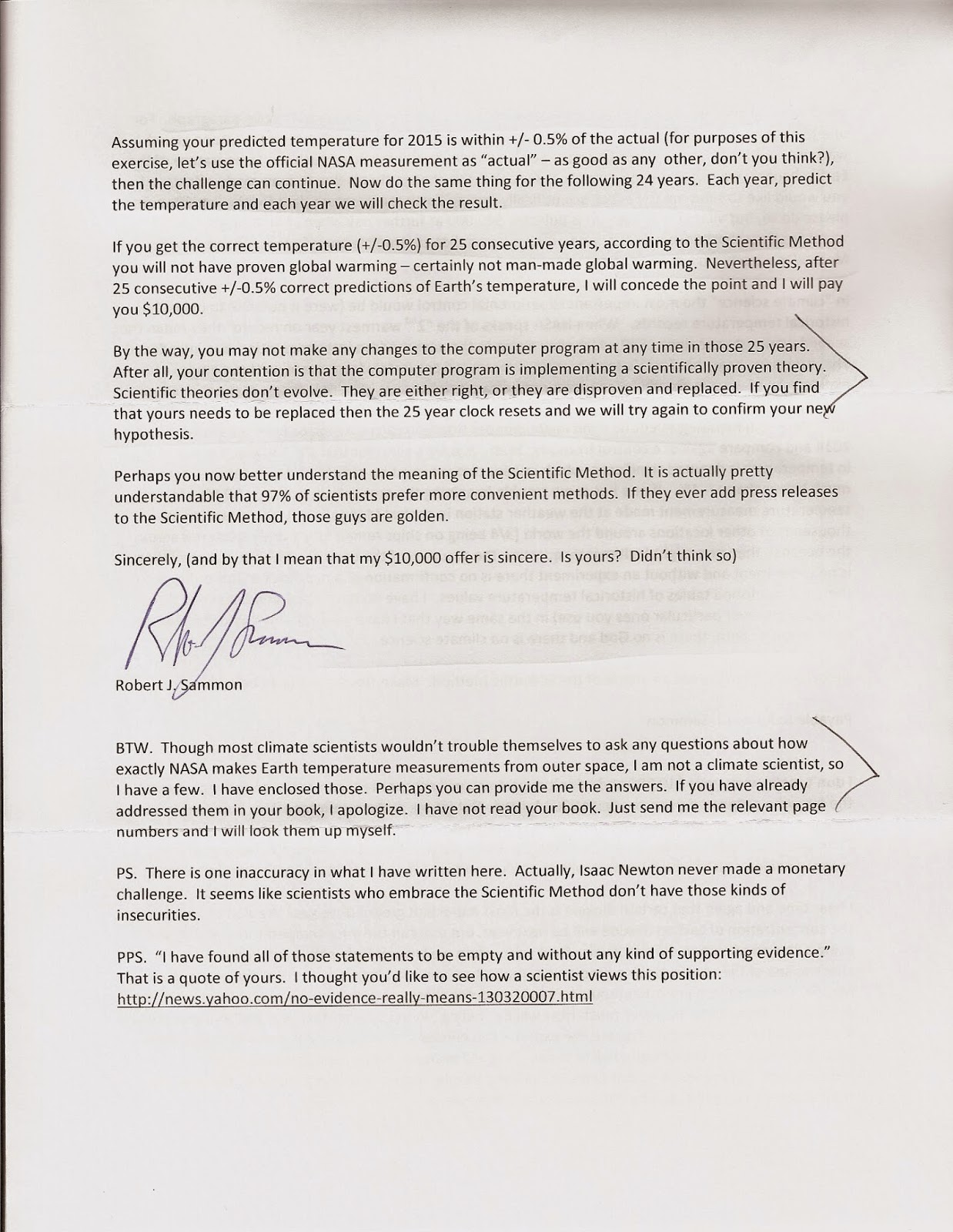 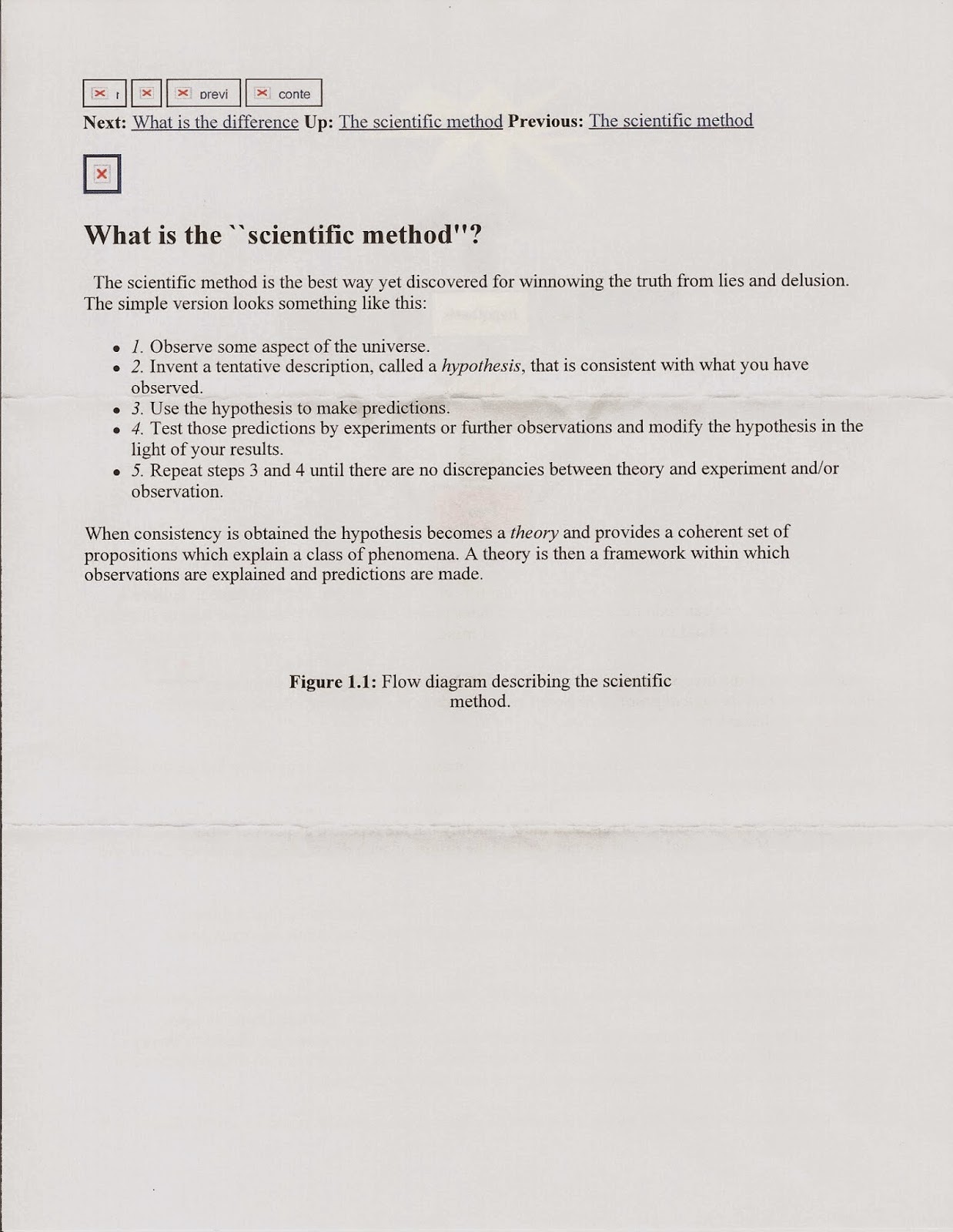 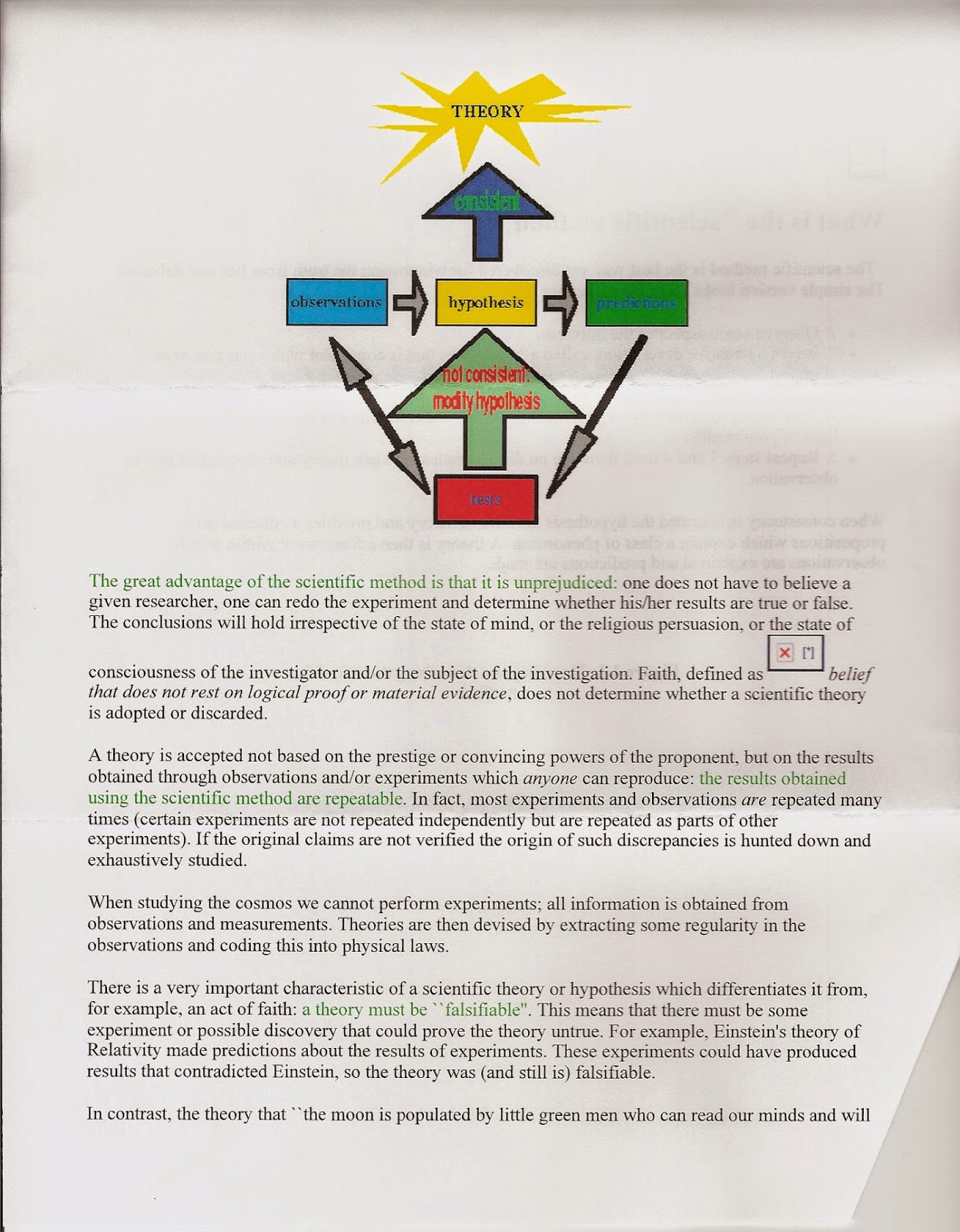 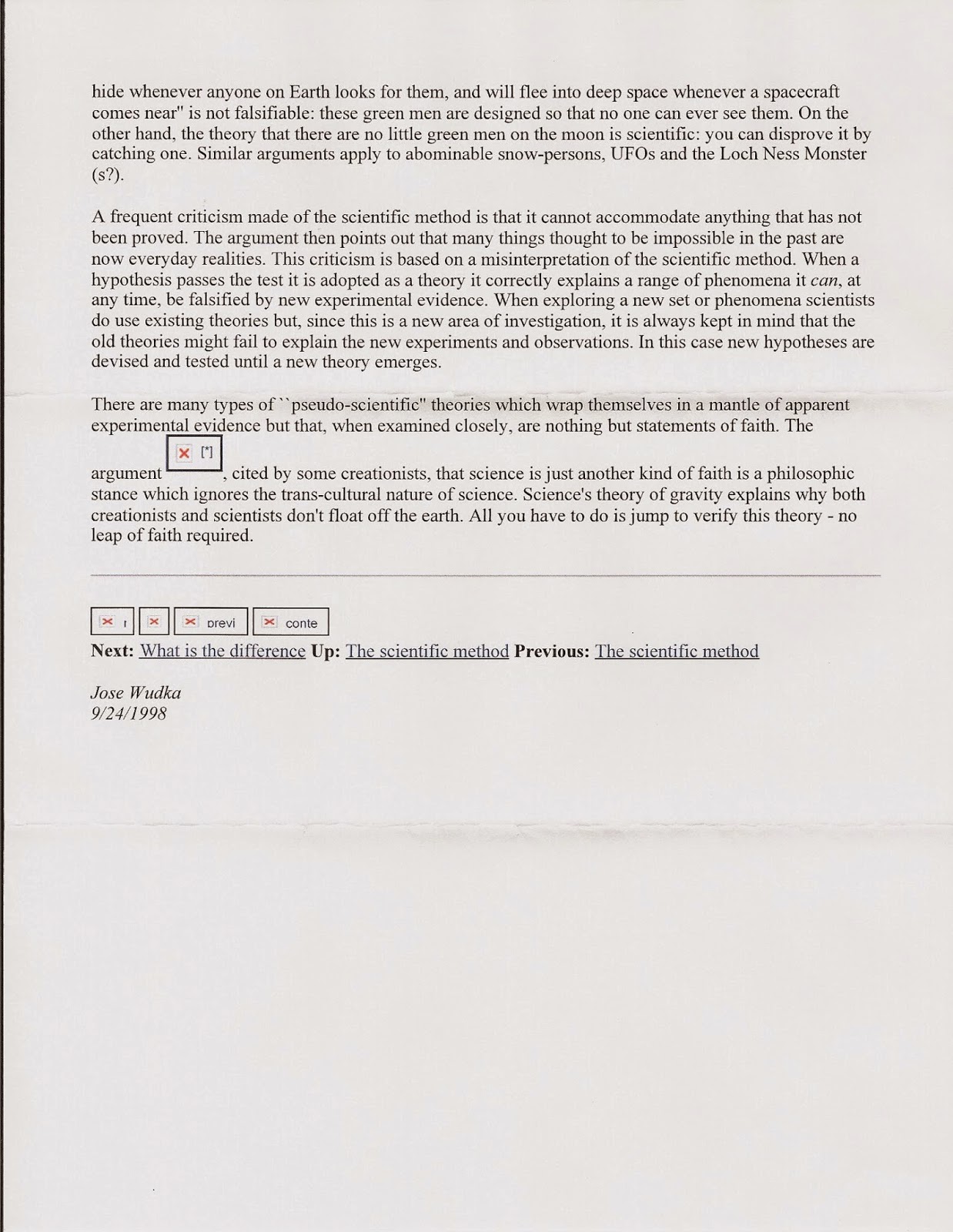 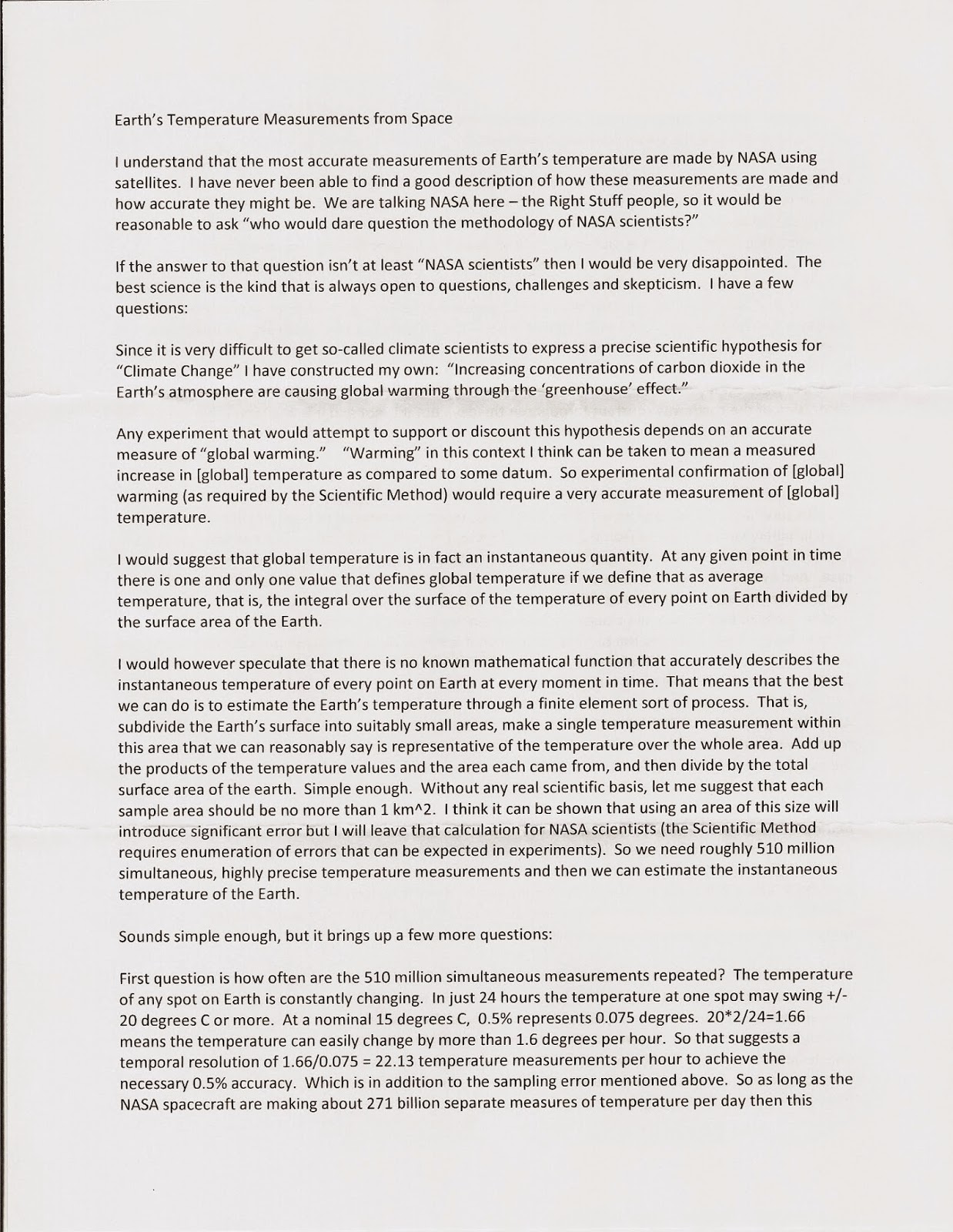 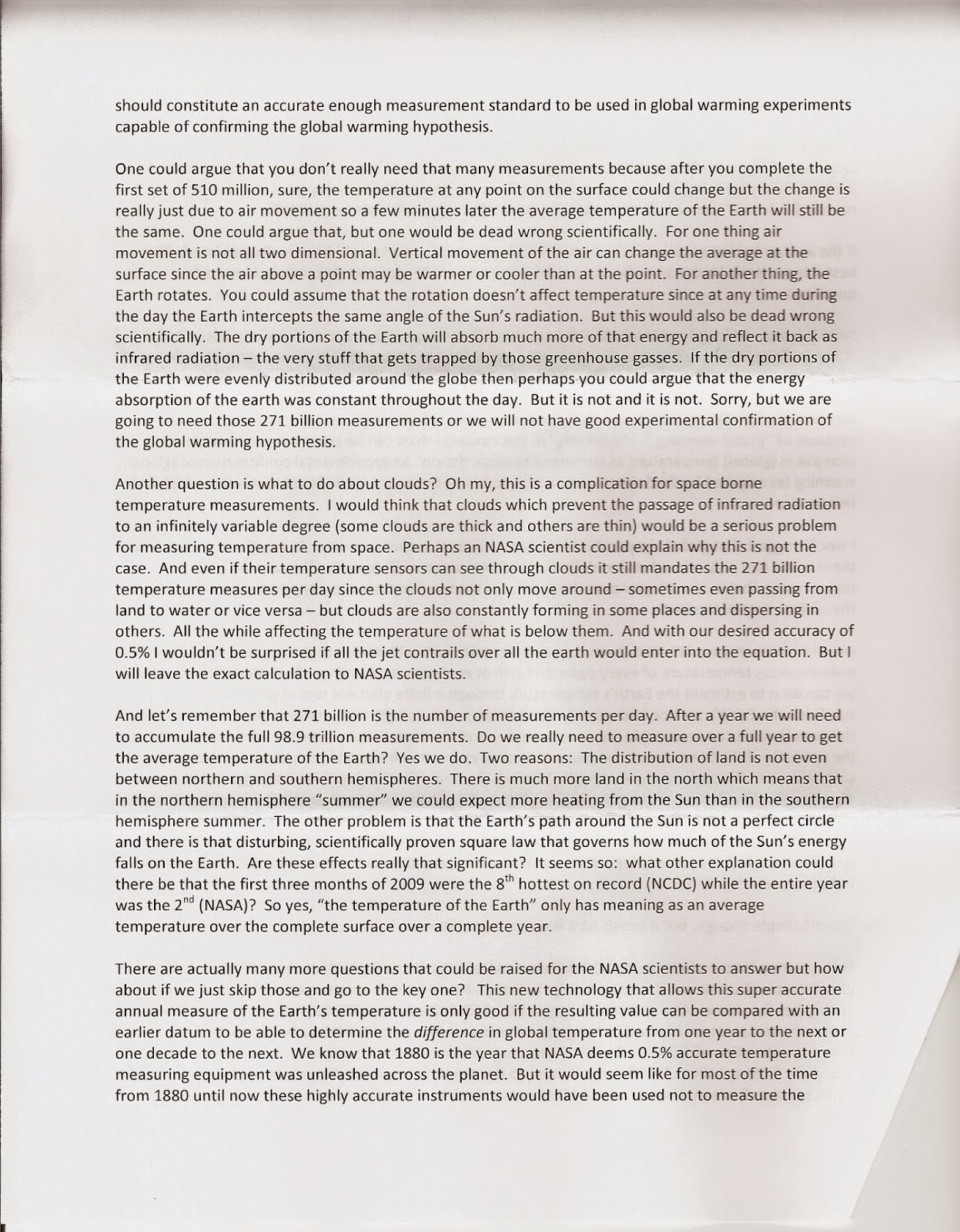 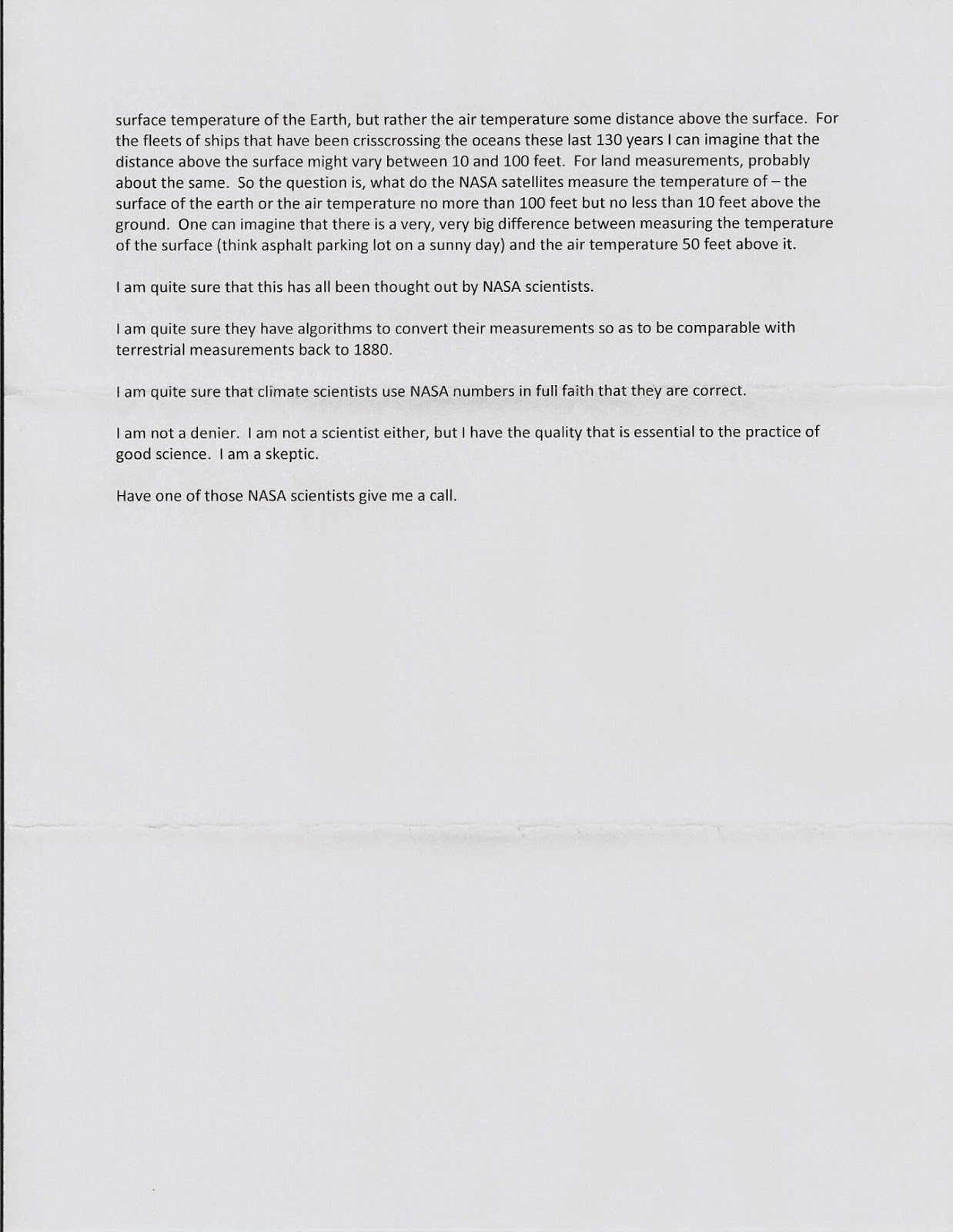 At this point I would love to give you a synopsis of his submission. The problem is that I am not sure what his submission is all about. I mean that sincerely. As far as I can tell, his submission consists of saying climate scientists don't understand what the scientific method is and, therefore, all of their work is invalid. He states, "the Scientific Method places a rather simple burden on the refuting of a theory: find one counter example and the theory is disproved." By his contention, if he can find even a single data point that does not conform with his definition of global warming, then the entire 'hypothesis' is incorrect and must be thrown out. I really can't figure out anything else, so I am going to go with that. I will address some specific comments as well.

I will spare you the wait. Mr Sammons did not do anything to disprove man made global warming. If his methodology was correct, it would be possible to prove that Earth  is flat, the Sun revolves around the Earth, the Moon landings are fake, Marilyn Monroe is still alive and hiding in Bermuda with John Kennedy and anything else you would like to prove.

Mr. Sammons begins his submission with a diatribe about the scientific method and gets nearly everything he says wrong. He states that he learned the scientific method in seventh grade. I would contend, based on his statements, that his understanding of the method has not progressed since then. Although the submission is nine pages long, there is actually very little after you filter out the diatribe. But, let's look at some of it, just to be sure.


First, he states the scientific method is a "method 97% of scientists seem to be unfamiliar with given that as best I can tell, it has never played a role in discussion about the man-made global warming hypothesis." So, Mr. Sammons has established the point that he thinks scientists don't understand the scientific method while he is an authoritative expert. Bad start.

Then, he discusses the issue of "consensus" in regards to the scientific method. While he is technically correct in saying a consensus is not a requirement for the scientific method, he omits the fact that part of the scientific method is repeatability. Any time one scientist discovers something, other scientists must be able to replicate the results, or it isn't valid. He not only leaves that out, but then equates climate science to "the dome over the world that holds the heavens back, the infinite abyss of the end of the oceans, and the revolution of the Sun around the Earth." To be clear, the consensus comes about because the experiments are done over and over with the same results; new findings are consistent with old findings; new discoveries explain previously discovered facts that were not understood; etc. Without the scientific method and repeatability, there would be no consensus. Scientists don't just agree on something because they feel like it, they must be convinced, just like anyone else. Mr. Sammons didn't discuss any of that.  Bad start, even worse continuation.

Next, "The most consistent fact about man-made global warming that is reported is that 97% of scientists believe it is true." False in a couple of way. It is actually 97% of climate scientists (the ones that know the most about the subject), not scientists in general. Also, you don't 'believe' in science. Do you believe in gravity? Do you believe that the Sun is a star? Science is the study and understanding of the natural laws of nature. You either understand them and accept them, or you don't. We already know Mr. Sammons doesn't do either.

Wow! We haven't even gotten through one-page of his nine-page, single-spaced, typed submission. This is going to be a long one.

Oh, wait. He then equates consensus to the faith religious clerics have in their beliefs. Wow! Offended all of the scientists and clerics at once. Quite an accomplishment. Maybe, if he had bothered to talk to any of those clerics, he would have learned that faith is not based on the scientific method and does not depend on any 'consensus.' That is the nature of religion. I have learned that it is also the nature of deniers, but it is most certainly not the way of scientists. Please, do SOME homework.

At the bottom of the first page, he teases me with the hope that he might present some kind of scientific submission when he starts out, "But back to your unfortunately pompous challenge that is going to cost you $10,000. If you really understood the Scientific Method you would not have made the challenge in the way that you did." But, it was only a tease. He then went into his dislike of Obama and how Isaac Newton didn't have a 97% consensus.

Finally, he says something that approaches a submission, "The Scientific Method places a very serious burden of proof on the transition from hypotheses to theory. And unfortunately for you monetary challenge, the Scientific Method places a rather simple burden on the refuting of a theory: find one counter example and the theory is disproved. I am quite certain that I will never see your $10,000 - such is the fate of unserious challenges. But to disprove man-made global warming theory scientifically, through the use of the Scientific Method, is a trivial exercise." (It is true he will never see my $10,000, but its because his submission is quite silly.)

OK. There it is. You would think, if it is such a 'trivial exercise' that he would get to it and earn his $10,000 (actually $30,000, including the pledge from The Young Turks). But, that isn't what he did. I tell you, I would really hate to go out drinking with this guy because he just loves to hear himself rant and rave. What he did at this point is to go into rant about some global warming issues he apparently takes exception to, without ever claiming they were examples of the 'counter example' that he states would be 'trivial' to present.

I will forgive him his next demonstration of ignorance, because so many deniers do this. He equated climate science to models. This is one of those issues I just have to keep addressing.

No, models are not climate science. They are mathematical tools we use to help us understand the real world, but they are not a replacement for all of the work that is done. The real world is not sitting around for some model to tell it what to do, it will do what it does according to the laws of physics. Models are tools, but so are thermometers, buoys, satellites, ice cores, mud cores, coral cores, tree rings, CO2 measurements, biodiversity counts, etc. There are many, many tools we use to provide us with a better understanding of what is going on in the real world. Speaking of experiments, Mr. Sammons stated, "As best I can tell, the best "climate science" can do in this regard is to write computer programs that predict future global temperatures." He demonstrates his lack of understanding on climate science with this statement. You would think that he would do at least some homework before making his submission, but I have found quite a few submissions that didn't include even the most fundamental fact checking, so he isn't all that unusual in this regard.

After nearly two pages of raving, he states that "a reasonable counter example would be to show the failure of a computer model to predict the temperature for a particular year." No, he is wrong, for the reason I already explained above. Computer models are merely mathematical tools we use. Whether they are right or wrong is irrelevant to the reality of man made global warming. Let's suppose AGW is real and the models get it wrong, does that mean AGW stopped being real? Let's go the other way and suppose AGW isn't real, but we make a global warming model that somehow gets the temperature right. Does that mean AGW suddenly became real when it wasn't before? The models do not change the reality and that seems to be the perception of many deniers. Models do not matter to the debate of the reality of man made global warming, although they matter a great deal as tools to help us understand it.

But, Mr. Sammons isn't done being wrong. He goes on about how he was looking for temperature data and that none of the agencies ever reported this data. He even states, "smart move, actually" about this. He states, "wouldn't you expect to be able to easily find documentation of the temperature of the Earth?" Not only would I expect it, but it is easy to find. Take a look here, Mr. Sammons - the National Climatic Data Center which is "responsible for preserving, monitoring, assessing, and providing public access to the Nation's treasure of climate and historical weather data and information." My guess is Mr. Sammons didn't look very hard. He stated that he would like me to send him the data for the last 30 years. Well, I just showed you where to find it. Of course, his misconception is that all he has to do is find a single data point that does not agree with the models and he has succeeded in proving AGW isn't real. Sorry, it doesn't work like that.

Then, he tries the old tactic of trying to change the challenge. This tactic is clearly designed to change the subject and distract the audience that he can't do what he claims to do. He wants me to build a climate model that will accurately predict, without ever being upgraded or improved, the temperature for the next 25 years. If I can't do that then, according to him, I have failed the scientific method (note to Mr. Sammon - scientific method is not a proper noun and should not be capitalized). If I cannot do that, according to him, man made global warming is not real.

Sorry, that won't work, either. The challenge is to people going around claiming they can prove man made global warming is not real. It is my challenge and you don't get to rewrite the challenge. If you would like to make your own challenge, feel free to do so.

In conclusion, I will quote Mr. Sammons one more time: "Don't worry, I have no illusions that I proved (rather, disproved) anything..."

We agree. Mr. Sammons, you did not prove, via the scientific method, that man made global warming is not real.


P.S. Mr. Sammons wanted some information on how temperatures are measured from space. Again, he showed that he doesn't do his homework. This information is very easy to find. Here are some examples.


Posted by Dialogues on Global Warming at 12:06 AM