2015 Shows a Reduction in Greenhouse Gas Emissions in the UK

A step closer towards the Kyoto Protocol

By 2020, the United Kingdom needs to reduce its greenhouse gas emissions if it wants to respect the Kyoto Protocol Treaty. As a reminder, the greenhouse gas emissions effect concerns the fact that certain gases trap the heat in the atmosphere, which affects the global water and air temperature. Those main gases are carbon dioxide (CO2), methane, nitrous oxide, hydrofluorocarbons, perfluorocarbons, sulfur hexafluoride and nitrogen trifluoride.
Nowadays, recent statistics have proven that the UK is currently meeting its target, according to the Department of Energy and Climate Change (DECC). As an example, in 2013 the emissions of greenhouse gases have decreased by 23.6% compared to 1990. 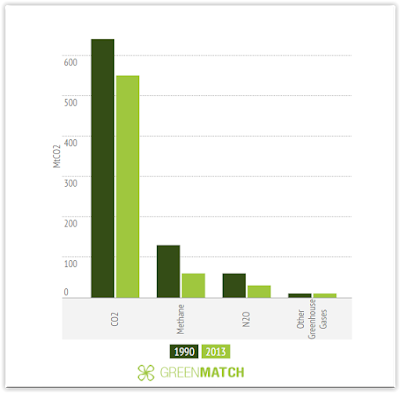 This was mainly caused by a 15% carbon dioxide emissions reduction in the energy sector. It could be explained as the energy sector changed its electricity generation sources from fossil fuels - coal and natural gas combustion- towards more renewable sources such as wind energy or renewable fuels combustion - i.e. wood.
In 2014, this general tendency was confirmed, accounting an additional decrease of 8.4% of greenhouse gas emissions, due to a 9.2% reduction of carbon dioxide emissions. Those results represent a big success for the government, when it was known that in 2013, 82% of the UK greenhouse gas emissions concerned carbon dioxide. 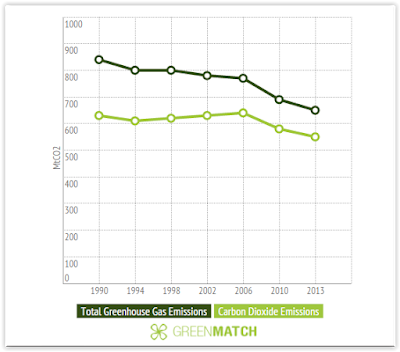 2014 has also been a good year for the residential sector that accounted a decrease of up to 16.6% of natural gas consumption- mainly oil and propane- for space heating and cooking. Thus, British households showed a preference in investing in clean and renewable resources such as wood-pellets boilers, biomass boilers, solar panels, heat pumps and so on. Those investments are nevertheless highly incentivized by the UK government through the Feed-in Tariff, the Green Deal and other green grants allowing UK citizens to receive some financial help in investing in green resources.
Except 2010 and 2012 when the weather was particularly cold in the UK, there has been since 2004 a downward trend in greenhouse gas emissions. Hence, we can forecast positive expectations for the upcoming years trend. The Kyoto Protocol would thus be honored if it stops as planned in 2020.
From July 2015 on, statistics will be available on the Office for National Statistics (ONS) website comparing the first half of 2015 with the past 25 years (starting in 1990).

Find out more information about green energy sources on www.greenmatch.co.uk

Posted by Dialogues on Global Warming at 11:57 AM