As President Trump’s nominees for government positions go through their Senate hearings, several of them have been asked about their views on climate change. The nominees have generally deflected questions on the issue by claiming there is a question as to how much effect manmade emissions are having on the climate. None of the nominees addressed the fact that essentially all climate scientists publishing research today have stated manmade emissions are responsible for the climate change observed in recent decades.

Marc Morano, publisher of the skeptical news site Climate Depot and a known climate change denier, defended the nominees statements and was quoted saying, “This is a semantic game that Trump’s Cabinet officials are playing,” Morano said. “Obviously, if you say you believe in climate change, it’s a meaningless statement. The media is so easy to fall for misdirections on this issue, and the Trump nominees have mastered that this week. You sort of just laugh at how gullible the media is.”[1]

Using statements that ‘feel’ true, but aren’t, is a popular strategy when one isn’t supported by the facts. As Mr. Morano pointed out, it is surprising to see how easily the news media allows itself to be duped into being the unwitting partner in this effort, frequently unwittingly publishing unsubstantiated claims as being valid and lending its own credibility to the source in the process.

A case in point is Tom Harris, executive director of the misnamed International Climate Science Coalition (ICSC). Harris is but one example of a group of individuals and organizations engaged in a tobacco industry-style campaign concerning climate change. As the executive director of ICSC, Mr. Harris is paid to place editorials and letters in news outlets to support the cause of the fossil fuel industry, using questionable logic, science and claims.

At the 2008 International Conference on Climate Change hosted by the Heartland Institute, Tom Harris gave a speech in which he discussed what he called "information sharing" and "coordinated local activism."[2] At one point, he directs the crowd to engage in a "well coordinated response" and contact newspapers after they publish one of his articles, to provide reviews about how much they enjoy articles by Tom Harris. In this way, Harris is able to get news outlets all over the country to publish his articles, despite the fact he is not consistent or scientifically credible.


“It’s pretty surprising to see how easily the media allows itself to get duped into this,” says Dr. Christopher Keating, a physicist who does research in geophysics and has published two books on climate change. “His articles have no scientific credibility and he isn’t even consistent in his claims.”

Harris has stated Canada should follow the advice of Philippine President Duterte and opt out of the Paris agreement on climate change.[3] For the record, Duerte has been implicated in the deaths of thousands, has compared himself to Hitler[4], stated he regrets he did not participate in the rape and murder of a lay minister[5] and said he once threw a man out of a helicopter.[6]

“This is not the example I would’ve used,” opines Keating. “He has even had his articles reprinted in North Korea[7] and Uzbekistan.[8] Meaning, he has been endorsed by two of the most despotic regimes in the world and thinks we should take advice from Duterte. But, the news media keeps publishing his submissions.”

Keating refers to a letter Harris had published in InsideHaltom.com as an example of Harris’ lack of consistency. “In this particular article, he states ’global warming … has been a good thing,’ But, in the same article, he states, ‘there is no convincing evidence that human activity is causing climate problems.’ Then, he says, ‘relatively little money is available to help the poor adapt to climate change today.’ [9]


The NIPCC, or Nongovernmental International Committee on Climate Change, is a fake science organization funded by the Heartland Institute in an effort to undermine the United Nations’ IPCC.
“The NIPCC has been completely debunked[10] and shown to be a pseudoscience organization,” continued Keating. “Harris often says they have thousands of peer-reviewed scientific papers to support their claims, but he can never produce any valid science. That’s because they don’t have any. Citing them as a source is like citing an astrologer. If you say climate change isn’t real because NIPCC says so, you might as well say it isn’t real because your daily horoscope in the newspaper says so. Both would be equally valid.”

NIPCC was founded and funded by Heartland Institute[11], which calls itself “the world’s most prominent think tank promoting skepticism about man-made climate change”. As such, NIPCC is funded, directly and indirectly, by fossil fuel interests and its goal is to undermine credible science. It even picked its name so that it can be confused with the UN’s IPCC and designed it’s publications to look the same as the UN reports. According to Keating, “This is a deliberate effort on their part to confuse the public. And yet, the media refers to them as if they are a credible source.”

“NASA, NOAA, the American Geophysical Union, the American Physical Society, and all the official scientific bodies of the nations on Earth agree that human activities are driving global warming.  Climate research from across the world is summarized every several years by the Intergovernmental Panel on Climate Change, the IPCC.  But Harris asks the news media to ignore the world’s climate scientists and the IPCC’s summary in favor of the NIPCC. And, news services all over the country willingly go along,” points out Keating.

Another example Keating cites is how the media repeats Harris when he states climate change is “a topic of intense debate in the science community.” [12] “This is a false statement and he completely ignores the fact that over 99% of recently published climate scientists[13] and 97% of all surveyed climate scientists[14] are in agreement that manmade emissions are causing climate change. There is no debate among credible scientists on this issue. The science is massively overwhelming and conclusive – manmade emissions are changing the climate.”

Harris frequently claims scientists and environmentalists “expect us to believe humanity controls our planet’s climate as if we had a global thermostat,”[15] and states, that “proof is lacking that humans control the climate.”[16]

“No one is saying we control the climate,” says Keating. “The science shows we are changing the climate, not controlling it. So, why is he making such a deceptive statement?”


Another frequent statement Harris makes is “The climate is always changing.” Keating responded, “This is the current ‘I hate science’ statement, similar to the claim “I’m not a scientist, but…” When people say this, they are implying they think all of the climate scientists in the world are unaware of that fact. We have climate scientists because the climate is always changing. The question is, ‘why is the climate changing today?’ Either Harris is unable to realize this, or he’s counting on his readers to be unable to figure it out for themselves. Really, there is no alternative. And, it is very deceitful because the climate has never changed this fast. It is easy to come to the conclusion that Harris leaves those facts out because it doesn’t help his agenda.”

Keating addressed Harris’ claims that we shouldn’t do anything about CO2 emissions because it is not a pollutant.[19] “Harris says CO2 is not a pollutant because it occurs naturally and is good for plants. The same can be said about raw sewage. It is produced naturally and has been used as fertilizer for thousands of years. But, no one wants it in their yard. You would have a hard time convincing people that sewage in their drinking water wasn’t pollution. What Harris is failing to mention is we are not discussing naturally produced CO2, we discussing CO2 produced by automobiles and power plants. Those emissions are not natural and are pollutants. And, Mr. Harris is misleading with his statements because he leaves out a lot of important information. For instance, CO2 would also be good for plants we don’t want, such as weeds in farm fields.”

His attempts to refer to science are equally bad. In one instance, he wrote an article, published in the Washington Post, claiming there was no scientific validity to an average surface temperature.[20] When this article was reviewed by seven climate scientists, their conclusion was that Harris’ overall scientific credibility was “very low.”[21]

“Why would the news media lend credence to someone who is rated as having ‘very low’ scientific credibility? This is one of those things the news media really needs to rethink,” says Keating.

Harris’ has lately been undermining efforts to address climate change by claiming we should instead by using that money to help people suffering from climate change. In an article published in the Des Moines Register, Harris stated, “Across the world people are suffering due to the effects of dangerous climate change. Yet aid agencies are unable to secure sufficient funds to help them because, of the more than $1 billion spent globally every day on climate finance, only 6 percent of it is goes to helping vulnerable people adapt to climate change today. The rest is spent trying to stop climate phenomena that might, or might not, happen in the distant future. This is immoral, effectively valuing the lives of people yet to be born more than those in need today.”[22]

“This is really an amazing statement on his part,” says Keating. “The reason people are suffering today is because Harris, and people like him, worked hard to prevent any actions from being taken back when we had a chance. Now, he’s essentially saying we shouldn’t do anything about climate change today because we didn’t do anything in the past. And, he doesn’t say anything about those people who will suffer in the future because we didn’t address climate change today.”

“After reading his statements, it seems to me that he is only interested in protecting wealthy people who are making fortunes from the fossil fuel industry and not workers and the world’s poor.” Keating cites Harris’ strong ties to the Heartland Institute, which has received funding from tobacco companies and numerous fossil fuel companies to support its anti-science campaigns, including the effort to convince people that second-hand smoke is not dangerous. Harris was awarded Heartland’s 2014 Winner of the Excellence in Climate Science Communications Award.[23] Other winners are Fred W. Singer, a man strongly associated with the largest campaign of deceit in American history, one which the tobacco industry admitted to and paid hundreds of billions of dollars in penalties for. In the past, Harris was the Director of Operations for the High Park Advocacy Group, a fossil fuel industry lobby firm. He was also a senior associate with APCO Worldwide, a PR firm that worked with tobacco giant Phillip Morris to develop a response to findings concerning the hazards of second-hand smoke.[24]

“We see this coordinated campaign to undermine science to the advantage of certain industry groups,” concludes Keating. “Harris is only one example of the people engaged in these efforts. They are certainly free to say these things, but I think the news media should also inform people of the nature of their campaign. People have the right to know.”

[6] Philippine leader says once threw man from helicopter, would do it again, Reuters, 29 Dec 2016, http://www.reuters.com/article/us-philippines-duterte-helicopter-idUSKBN14I0DH 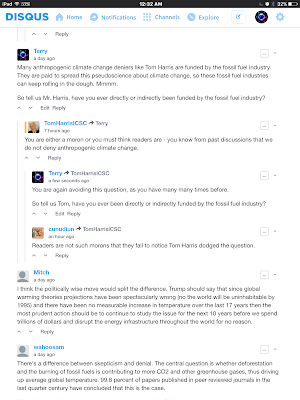 Posted by Dialogues on Global Warming at 1:08 PM