News about sea ice continues to be bleak

I made a posting about the sea ice extent recently, but there has been so much bad news since then that I felt I needed to do an update already. A recent article in Climate Central discussed how the sea ice extent has hit record lows on both poles, although the situation in the south is much more complicated than in the north and the ice loss there may not be due entirely to climate change.

The extent of the sea ice is dependent on many things, but so many things have turned negative that we find ourselves in the situation of hoping for a low-probability series of events to help it recover. There may be a surge this summer because one of the factors in the extent is the summer weather. If the weather is cold and cloudy this summer, expect to see some recovery. Personally, the best I am expecting is that it will be bad, but not as bad as expected. And, that is the low probability scenario I was speaking of. Hopefully, I'll be wrong.

Here are some graphics to show how bad the ice is. These come from the Pan-Arctic Ice Ocean Modeling and Assimilation System (PIOMAS). You can find a discussion on these figures on the Arctic Sea Ice Blog.


The next plot shows the ice volume as a function of year and allows for year-to-year comparisons. The red line shows the data for 2017 and shows it is lower than any other year.


This is an interesting plot. It shows a plot of monthly ice volume versus years and has been dubbed the Arctic Death Spiral. Each colored line represents a given month and is plotted to show how the volume each month has changed as a function of time. The year 1979 is located at the 12 o'clock position and the years advance clockwise until 2017, which is located at about the 11:00 position. This plot is very useful to compare the ice volume between different months. For instance, the red line represents the ice volume for January while the black line is for September, the month with the minimum ice extent. Comparing the two lines shows there was only one year in the 1980s, 1981, where the minimum extent was less than the current January extent, a month when we should be approaching maximum extent. So, we can see how the maximum extent today is approximately the minimum extent of the 1980s. 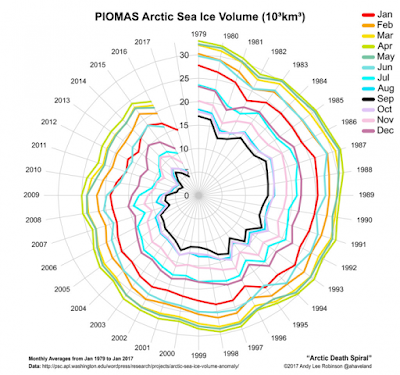 This plot is from the Polar Portal, a collaborative effort of Danish research institutions, and shows the ice thickness. The cooler temperature (blues and purples) are areas with thinner the ice which formed this year (up to about 2 meters thick). The red and white areas and the thickest areas and represents the oldest ice (over 4 meters thick). The entire center of this map should be red and white. Instead, the old ice is limited to an area north of Greenland where it is concentrated by winds and currents. The blue and purple areas will certainly melt this summer. The green and yellow are vulnerable. If left to themselves, they could melt. However, storms and waves are likely to pile up the ice so there is only a small chance we would see all of that ice melt. The red and white areas may get thinner, but are not likely to melt completely.


This is the current plot of the ice extent from the National Snow and Ice Data Center (NSIDC). The darker (complete curve) line is for 2015 while the red line is for 2016. The light blue (incomplete curve) line is for 2017 to date. At the time, 2015 reached the lowest maximum extent ever recorded. That record last one year until the new lowest maximum extent ever recorded occurred in the spring of 2016. So far, 2017 is tracking significantly lower than either of those years. If the trend continues for the next few weeks, we will see a new lowest maximum extent. I've already gone on record as predicting it will come in at around 14.2 million square kilometers and I think I will stick with the prediction.

Posted by Dialogues on Global Warming at 5:31 AM