My Mistakes Identified By Tom Harris

I made an extensive review of a ridiculous interview Tom Harris made on Skype. You can read it here: Tom Harris Fraudulent Scientist. Harris has made a couple of interesting remarks, including stating that I made numerous mistakes.

Tom Harris12 hours ago (edited)
Mr. Keating has made attacking me into a bit of a cottage industry - see http://tomharrisicsc.blogspot.ca/2016/12/tom-harris-paid-shill.html. Much of what he says is so wrong (or irrelevant) that it is not worth my time to correct. Nevertheless, the fact he spends so much time attacked me tells me I am over the target: the hopelessly flawed science backing the climate scare.﻿


I have offered Harris the chance to point out any mistakes and stated I would gladly correct the post and even give him credit for the correction.


Christopher Keating11 hours ago
You haven't given us any specifics, Tom. I'll tell you what, show us where I'm wrong and I'll correct anything you can demonstrate isn't correct. To sweeten the pot for you, I'll even acknowledge that you were the one who corrected me. I would think this would be easy, considering you just stated that "Much of what he says is so wrong..." We're anxiously waiting to hear from you.﻿

Here's a screen shot of the exchange: 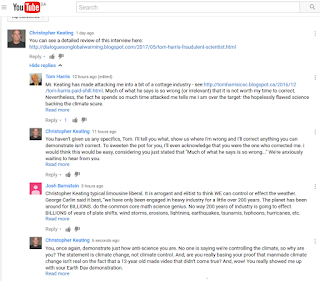 Here is the list of all of my mistakes identified by Tom Harris:


Posted by Dialogues on Global Warming at 1:17 AM