Heartland's deceptions are on display

Our favorite paid shill for the fossil fuel industry recently placed one of his typically deceptive anti-science pieces in the LancasterOnline, resulting in a response letter from one reader, Pete Kuntz. Interestingly, the Heartland Institute decided to step in and act as Harris' attack dog. This is the role normally reserved for Russell Cook, but he turned out to be more of a yap-dog than an attack one, so I guess Harris is upping the ante. The results are pretty predictable. Not only are Harris' deceptions exposed, so are Heartland's. You can read Harris' original letter here and Mr. Kuntz's response letter here. Heartland's letter to LancasterOnline is included in the comments section and includes a demand by Heartland that the response letter be removed. I'm reproducing the comment from Jim Lakely, Heartland's communication director below verbatim. For the sake of documentation, I'm including snapshots of both Mr. Kuntz's letter and Mr. Lakely's response at the bottom of this post.

Jim Lakely ·
Communications Director at Heartland Institute
I sent this letter to the Suzanne Cassidy, opinion editor of the LancasterOnline, yesterday morning. No response yet.

I write today to let you know that the letter titled “Fossil fuel industry behind climate denial” by Pete Kuntz of Manheim Township contains several lies about The Heartland Institute. The errors are so egregious I believe it requires removing his letter from your site and explaining to your readers why it was removed.

You published this falsehood by Kuntz: “Harris is a ‘co-sponsor’ of the Heartland Institute, which receives hundreds of millions from the largest fossil fuel corporations in the U.S. to promote climate denial.”

The idea that “Heartland receives hundreds of millions” from fossil fuel companies is absurd and patently false. It appears Kuntz got this lie from DeSmogBlog, a smear site that has zero credibility. Perhaps Kuntz likely extrapolated a lie about someone else and put it on Heartland. You should be embarrassed that a letter-writer used DeSmog as a source your readers should trust.

The Heartland Institute’s annual budget the last few years has been around $5 million, and was less than that (and often half) for most of Heartland’s 34 years and counting as a free-market think tank. And we deal with a lot of public policy issues with climate and energy work taking up only about a quarter of our budget. Corporate financial support for Heartland is a small minority of our annual funding and no one corporation has ever contributed more than 5 percent of our total receipts. Click the URL below for more on our funding, including a link to our latest 990 form.

Also, Tom Harris is a policy advisor to Heartland, not a “co-sponsor,” whatever that is.

You published this falsehood by Kuntz: "The fossil fuel industry has spent well over $100 million in the past two decades to create the impression that there’s a scientific “debate” about man-made climate change, just as the tobacco industry, for decades, falsely claimed there was scientific debate about whether smoking caused lung cancer — also using the Heartland Institute as a front for the money they gave “doctors” (Union of Concerned Scientists’ website, “The Climate Deception Dossiers”)."

The Heartland Institute has never supported a “scientific debate about whether smoking caused lung cancer.” This is our position on tobacco, which is on our website.

"Heartland's long-standing position on tobacco is that smoking is a risk factor for many diseases; we have never denied that smoking kills. We argue that the risks are exaggerated by the public health community to justify their calls for more regulations on businesses and higher taxes on smokers, and that the risk of adverse health effects from second-hand smoke is dramatically less than for active smoking, with many studies finding no adverse health effects at all. These positions are supported by many prominent scientists and virtually all free-market think tanks."

Are you going to remove this letter that contains multiple egregious lies about The Heartland Institute that are intended to hurt our reputation and misinform your readers?


Mr. Lakely’s letter to LancasterOnline is laughable at best and an outright lie at worst. Certainly, Mr. Lakely practices Heartland’s longstanding policy of deception with his letter. Let’s examine his statements concerning smoking.

Mr. Lakely stated, “Heartland's long-standing position on tobacco is that smoking is a risk factor for many diseases; we have never denied that smoking kills.”

The research used to justify government regulation of second-hand smoke has been powerfully challenged by critics, including Congress’s own research bureau. According to the EPA, the risk ratio for forty years of exposure to a pack-a-day smoker is just 1.19. Epidemiologists as a rule are skeptical of any relative risks lower than 3 and dismiss as random ratios less than 1.3.
An important report on second-smoke appeared in the May 12, 2003 issue of the British Medical Journal. Two epidemiologists, James Enstrom at UCLA and Geoffrey Kabat at the State University of New York at Stony Brook, analyzed data collected by the American Cancer Society from more than 100,000 Californians from 1959 through 1997.
“The results do not support a causal relation between environmental tobacco smoke and tobacco related mortality,” the researchers wrote, although they do not rule out a small effect. “The association between tobacco smoke and coronary heart disease and lung cancer may be considerably weaker than generally believed.”
“It is generally considered that exposure to environmental tobacco smoke is roughly equivalent to smoking one cigarette per day,” according to Enstrom and Kabat. “If so, a small increase in lung cancer is possible, but the commonly reported 30 percent increase in heart disease risk--the purported cause of almost all the deaths attributed to secondhand smoke -- is highly implausible.”

Before proceeding, I would like to make an interesting observation about one of their links, specifically the link to a Congressional report. When you click on that link it only takes you to Heartland documents and never shows you an actual government report. In fact, the Congressional Research Service did an analysis of the secondhand smoke and this report was pretty much shelved – not because it didn’t give the desired results but because almost all of the data provided came from the tobacco industry and the reviewers were economists, not scientists. Those are little details Heartland never likes to publicize.

Speaking of things they don’t like to publicize, let’s take a look at the statements they’ve made in the press. Joe Bast, the former president of Heartland, wrote an opinion piece, “Five Lies about Tobacco,” where he stated, among other things, “smoking in moderation has few, if any, adverse health effects,” and stated it was safe to smoke up to seven cigarettes a day without increasing the risk of lung cancer. True to form, Mr. Bast later denied making any such statement.

What is really interesting is the emails uncovered between Mr. Bast and the tobacco industry, including the following snippets from a letter from Mr. Bast  to Roy Marden, the Manager of Industry Affairs for Philip Morris Management,  when he was soliciting $35,000 in contributions from Philip Morris: "Heartland does many things that benefit Philip Morris' bottom line." Mr. Bast cited a number of reports, opinion pieces, and news articles placed by Heartland in defense of the tobacco industry and in opposition to those seeking to highlight the health risks associated with smoking. Continuing, Mr. Bast stated, "Heartland has devoted considerable attention to defending tobacco," wrote Bast in the letter. He pointed to several examples, including "two of my essays, titled 'Five Lies About Tobacco' and 'Joe Camel is Innocent.'"


So, we now know Heartland, in reality, has claimed secondhand smoke (and smoking in general, in moderation) is harmless, and they still do. But, what about the experts? Contrary to the claims made by Heartland, an organization with no scientific research facilities, this is what the Centers for Disease Control and Prevention has to say about second-hand smoke:


Secondhand smoke is the combination of smoke from the burning end of a cigarette and the smoke breathed out by smokers. Secondhand smoke contains more than 7,000 chemicals. Hundreds are toxic and about 70 can cause cancer.1,2,3,4
Since the 1964 Surgeon General’s Report, 2.5 million adults who were nonsmokers died because they breathed secondhand smoke.1
There is no risk-free level of exposure to secondhand smoke.


Pretty definitive and not in agreement with Heartland. But, that's only one source. What do others say? This is what the National Cancer Institute (part of the National Institutes of Health) says:


But, those are both American. What do other countries say? Here's what they're saying in Britain:

Breathing in other people's smoke, also called second-hand smoke, can cause cancer. Passive smoking can increase a non-smoker's risk of getting lung cancer by a quarter, and may also increase the risk of cancers of the larynx (voice box) and pharynx (upper throat).


Second-hand smoke can cause other health problems too. Every year, second-hand smoke kills thousands of people in the UK from lung cancer, heart disease, stroke and the lung disease Chronic Obstructive Pulmonary Disease (COPD).

“There is no safe level of secondhand smoke.”

As you can see, Heartland’s history of deception goes way back. In fact, the Heartland Institute is, once again, in the position of telling all the world’s experts they are wrong and Heartland is right – the ONLY group that is right. It would be nice if Mr. Lakely would at least make an attempt to verify his facts. But, of course, the truth has never worked to serve the purposes of Heartland.

It is also notable that Mr. Lakely attempted to smear the reputation of DeSmogBlog. Once again, reality doesn’t agree with Mr. Lakely’s claims. The reality is that DeSmogBlog is a highly regarded source. A panel of journalists and public relations professionals selected them for an award for the "highest ethical and professional standards while performing outstanding work."

Heartland’s concern with DeSmogBlog goes back to when a number of embarrassing Heartland documents were published on their website – documents Heartland has gone to increasingly embarrassing attempts to deny. In fact, DeSmogBlog is highly respected by everyone familiar with them. Except, of course, the people most engaged in deception – people like the Heartland Institute. It is no surprise to see that Mr. Lakely is continuing the tradition. 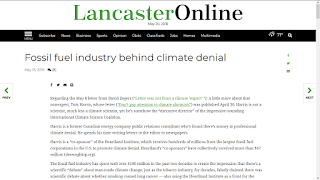 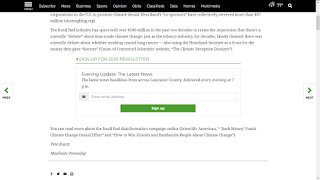 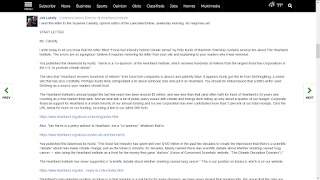 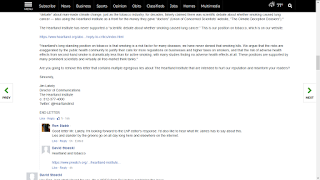 Posted by Dialogues on Global Warming at 1:58 PM