We just had a cold winter and we have even had a few cold fronts recently, including one right now. Its pretty pleasant and I wish this would happen more often. We also got some rain out of it and that was sorely needed in these parts (rural central Texas). I measured that we got about 2.25 inches over a period of about 36 hours at my house. It was a nice, soaking rain. To put that in perspective, we were almost six inches behind for the year and we only get about 28 inches for the whole year. We got a one-inch rainfall last week (May 8) and that was the first significant rain since before Christmas. The total amount of rain we had received for the entire year before that was measured in hundredths on an inch (Yes, that was the total for the year-to-date!). So, this cold front was a real blessing. Out here, if you aren't making your living off the land, your customers probably are.

But, as usual, the deniers are twisting the facts to deceive people. I have already heard deniers using the example of the winter and even these recent cold fronts as evidence there is no global warming. They are deceiving people two ways when they do this. A local weather event does not mean anything about the globe. Global warming means the entire planet, not just the American Midwest.

Also, they are trying to equate weather to climate. They are related, but they are not the same thing. As an example, let's say you watch the TV weather report on the evening news and the weather man says, "Today's high was 92 and the average high for today is 89." In this case, the high of 92 is the weather, the average high for today of 89 is the climate. Related, but different. Climate is the weather that prevails over a long period of time- the long-term average of the weather.

This current cold-front and this past winter do not mean global warming has stopped. Take a look at this plot from the Climate Change Institute Reanalyzer. It shows the difference between today's temperature and the 1979-2000 average.: 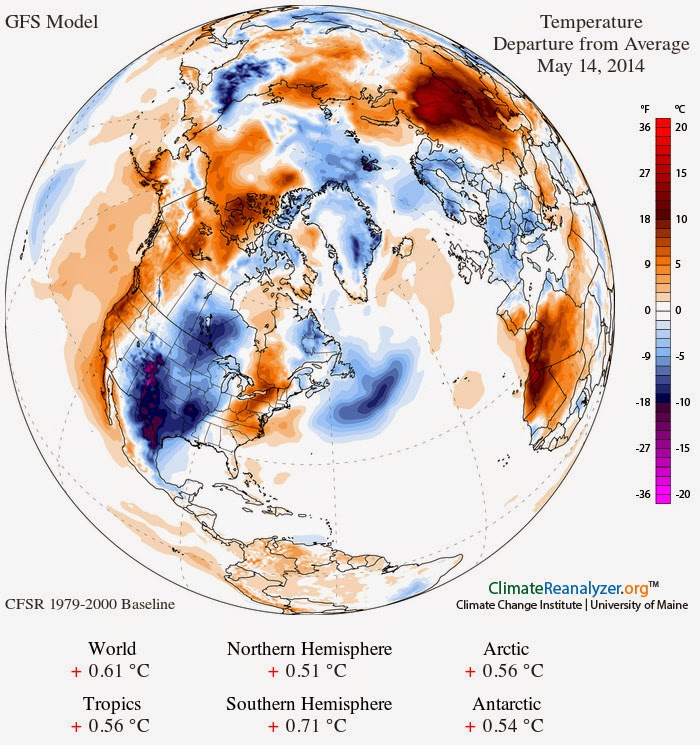 You can see that we in the Midwest are experiencing that cold snap I referenced above (big blue area). You can also see that there are many places that are hotter than average (red areas). More importantly, take a look at the average temperature difference for the different regions of the world, shown below the globe. Each region listed has an average temperature that is higher than the 1979-2000 average. In other words, every part of the planet is hotter now than during the 199-2000 period.

So, when the deniers point at the weather and tell you that there is no global warming, you now know it isn't true.

Posted by Dialogues on Global Warming at 11:38 AM