The summer melt season of 2012 was very dramatic. Take a look at this plot from the National Snow and Ice Data Center (NSIDC). 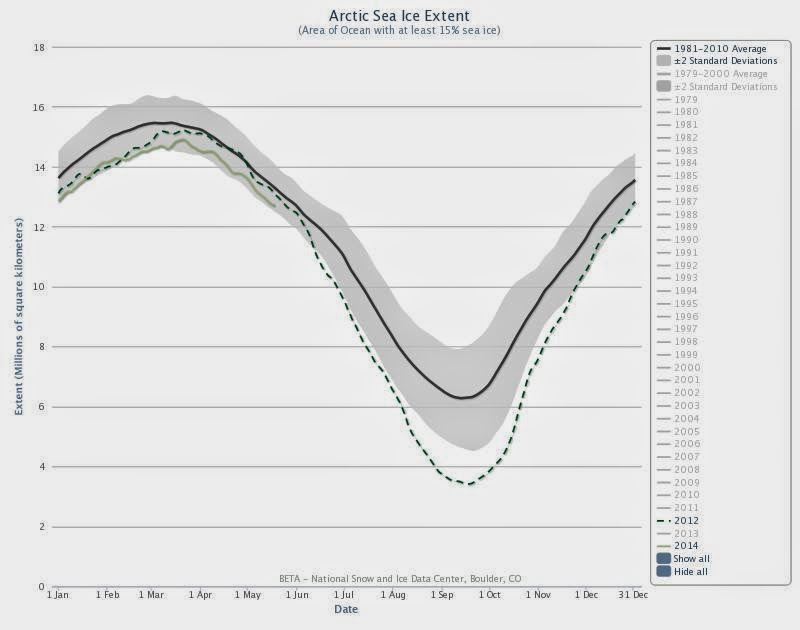 Something similar was observed in Greenland at the same time. Normally, the ice on top of the ice sheet doesn't melt, or melts very little. It is over 2 miles high in places and the highest elevations remain below freezing, even during the summer. But, in the summer of 2012, 97% of the ice sheet was melting at one time. This was the most extensive melting event since 1889.

A new study done by researchers at Dartmouth College found evidence that this extensive melting on Greenland was not due solely because of global warming, but by a combination of warming and soot from wildfires. In particular, extreme forest fires in Siberia sent soot and particulate matter high in the atmosphere and some of that matter settled on the Greenland ice sheet. By making the ice slightly darker (known as lowering the albedo), the soot increased the amount of sunlight absorbed by the ice and increased the melting. There is evidence something similar may have occurred in 1889, as well.

The question I now have is, did this also happen to the sea ice? The fires of 2012 may have been responsible for the Greenland melting, but wouldn't explain the sea ice melting. The fires didn't start until July, so the smoke could not have been on the sea ice at the beginning of June. The smoke was blowing across the Pacific by early-July, so it is possible it fell on Greenland in time for the big ice melt.

However, there were also massive forest fires in Siberia two years earlier, in the summer of 2010. If the smoke from those fires was lofted high in the atmosphere it might have taken over a year to fall in the Arctic region. We would need to get some ice cores that included that time frame and see if there are traces of soot in the ice. Then, we would need to check the composition of that soot to try and identify where it came from.

This doesn't mean climate change is off the hook. Even with the soot, global warming is responsible because it made the Arctic region warmer (allowing the ice to melt) and it is also responsible for the events in Siberia that led to the wildfires (putting the soot in the air).

This year might be a test of the hypotheses. If it took 1-1/2 to 2 years for the 2010 smoke to get to the Arctic ice, then that would be a good starting guess for how long it took the smoke from the 2012 fires to get there. If so, this might be a very bad year for Arctic sea ice melting.
Posted by Dialogues on Global Warming at 10:18 AM