MANIPULATED BY THE REFEREES!

In response to comments I made on the following website:

I disputed the claims of another commenter who used the name Bodhisattva 1, and who used a photo of the Dalia Lama next to this screenname, but, I have had some of my best posts removed. In one of those posts, I disputed the commenter’s claims that climate scientists have failed to prove that virtually any climate warming at all has happened in the last 40 years—a claim that taken on face value, is completely absurd! So, I used the following link to provide some info about Roy Spencer which contradicts his claims to have never accepted money from any source for his support of climate change deniers (or as he prefers) from skeptics.

“Spencer is a registered speaker at the Heartland Institute's “America First Energy Conference” (AFEC 2018) in New Orleans, Louisiana. [100]
“The purpose of this event is to promote and expand energy freedom in the United States, as outlined in President Donald Trump’s bold America First Energy Plan, a proposal first released during the 2016 presidential campaign. The president’s plan marks a decisive change in direction from the Obama administration’s 'war on fossil fuels' and focus on the theory of catastrophic man-caused climate change,” the conference description reads. [101]”


And about Spencer’s supposed lack of ties to anti global warming special interest groups--take a look at this link:

“A research scientist with the University of Alabama at Huntsville's Earth System Science Center (ESSC), Roy Spencer is a climate contrarian with solid academic credentials. And his website bio notes that he "has never been asked by any oil company to perform any kind of service. Not even Exxon-Mobil."

“But Spencer doesn't disclose his leadership roles in climate skeptic groups financed by Exxon and other key players in what's been dubbed the "climate denial machine": the network of companies, think tanks and foundations that have sought to deny and downplay the scientific consensus that global warming is real and is caused in large part by human activity.”


The bottom line is, even if he (willingly) accepts funding from special interests without being directed by them, he is still accepting money from those who would likely expect his research to mirror their own claims.

And from the following links I provided evidence that the Dalai Lama actually acknowledges human caused climate change, and urges us to take actions to reduce greenhouse gas emissions:

“Yesterday, the Dalai Lama released a video urging world leaders to take strong action at the UN climate talks starting on November 30 in Paris. The Tibetan Buddhist spiritual leader is one of growing number of religious leaders, including Pope Francis and Patriarch Bartholomew, to call for immediate climate action.”


And here are some of his comments reported in the following link from The Guardian;

“Logically, human beings have the responsibility to reduce these problems and finally eliminate these problems because we created them,” he said.
Like Pope Francis’s plea for younger generations to take more action in his environmental encyclical, the Dalai Lama also appealed to the young to “take a more active role in protecting this planet, including the Tibetan plateau.” We can only pray that world leaders will actually listen to these hopeful young voices, though.”


Why the Dali Lama needs to hide behind the screen name of Bodhisattva 1, I’ll never know. And as the quote above indicates, he rejects man’s role in causing (dangerous) global warming. Here is a link to another Guardian article:

“Perhaps the darlings of the denialist community are two researchers out of Alabama (John Christy and Roy Spencer). They rose to public attention in the mid-1990s when they reportedly showed that the atmosphere was not warming and was actually cooling. It turns out they had made some pretty significant errors and when other researchers identified those errors, the new results showed a warming.”

“To provide perspective, we know the Earth is warming because we can measure it. Most of the heat (93%) goes into the oceans and we have sensors measuring ocean temperatures that show this. We also know about warming because we have thermometers and other sensors all over the planet measuring “the temperature at the surface or in the first few meters of air at the surface. Those temperatures are rising too. We are also seeing ice melting and sea level rising around the planet.”


So, the evidence is clear. What Christy and Spencer focus on is the temperatures measured far above the Earth’s surface in the troposphere and the stratosphere. Generally, over the past few decades these two scientists have claimed the troposphere temperatures are not rising very rapidly. This argument has been picked up to deny the reality of human caused climate change – but it has been found to be wrong.” Take for example statements made in regard to his studies science worthiness;

“The editor-in-chief of Remote Sensing, Wolfgang Wagner, later resigned over publication of Spencer and Braswell (2011),[23] stating, "From a purely formal point of view, there were no errors with the review process. [...] the problem I see with the paper by Spencer and Braswell is not that it declared a minority view ...but that it essentially ignored the scientific arguments of its opponents. This latter point was missed in the review process, explaining why I perceive this paper to be fundamentally flawed and therefore wrongly accepted by the journal."[24] Wagner added he, "would also like to personally protest against how the authors and like-minded climate skeptics have much exaggerated the paper's conclusions in public statements".[23][24]


Andrew Dessler later published a paper opposing the claims of Spencer and Braswell (2011) in Geophysical Research Letters.[25] He stated, among other things:
“First, [they] analyzed 14 models, but they plotted only six models and the particular observational data set that provided maximum support for their hypothesis. Plotting all of the models and all of the data provide a much different conclusion.”
Here is approximately what I said in the last paragraph of my comment, and which has also mysteriously vanished;

“How do you sleep at night? First you slander the Dalai Lama by calling him Bodhisattva 1 and misrepresenting what he actually says about man’s role in global warming. Then you failed to mention all of the associations (Spencer) has with big oil companies and special interests even though you tacitly rely on claims that Spencer has never been asked to do anything for such companies. The bottom line is that whether Spencer is asked by big oil companies to do bogus research or not, voluntarily, or by way of bribes, he has willingly provided inaccurate and dishonest information to the big oil and think tanks which support them! But, those who really want to communicate the truth don’t need to depend on lies to bolster their positions—shame on you!”


May I also point out that, since the screen name of this commenter is Bodhisattva 1, and includes a photo of the Dali Lama, that this commenter is only avoiding charges of slander by way of calling him or herself, Bodhisattva 1, and thus  did not overtly claim that  he or she represents the specific opinions held by the leader of the Tibetan Buddhist faith—however the purpose for his or her using that screen name is clear! I posted some of the things he or she said near the end of this comment.

Although this comment was not available via the printout of individual posts made on the Katherine Hayhoe thread, I was able to go back to my primary forum notifications which were received via email and make copies of them:

And, although his or her screenname would not copy, the following statements including the graph, were posted by the commenter using the name Bodhisattva 1 on the same website when discussing the views of Katherine Hayhoe.

“Exactly why the word "skeptic" does not apply to those who are full of Catastrophic Anthropogenic Climate Change Alarmism. They refuse to see over 20 years of data... in fact now going on 40 years... that show that the gloom and doom predictions of their ilk are false. Here's one small part of the proof:” 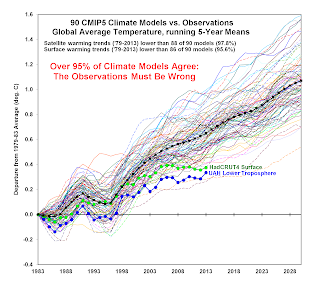 Personally, I think the black line indicates the exact opposite of what Bodhisattva 1 claims. In fact, even when disregarding actual amounts of increase, almost all the charted lines on it, are indicative of rising or increasing global temperature averages.

In closing I would also like to note that on many supposedly liberal forums such as Media Matters, I have consciously tried to avoid obscenities and nasty comments towards others. But, if one simply glances down the list of comments made on any controversial website, one will see so many obscene and childish comments tossed at one commenter by another, that one will be tempted to laugh.

So yes! When site moderators refuse to publish my comments---at least until after they have been banished indefinitely to my disqus page—even though nothing in them breaks the rules---how can these moderators honestly say that someone who flings around mentions of the F word, and whose entire response consists of one ad hominem insult after another, is leaving more polite and reasonable comments than mine?

I find that, on many websites, on which one would think my rebuttals would be welcomed, even the moderators on those left leaning sites are censoring comments made by liberals and/or left-wing commenters? —what for I don’t know? —even if such comments are written respectfully and without the use of obscenities or insults, they are still not permitted? —Why? Anyone’s guess is as good as mine?

Posted by Dialogues on Global Warming at 5:18 PM No comments: