One of the most inane of the deniers around is the climate science harasser Russell Cook. He's a hatchet man for the Heartland Institute and can frequently be found fighting with commenters on editorials by Tom Harris. When Harris is unable to defend his comments, Cook steps in and attacks the commenters for him. Problem is, his attacks are always the same, no matter what the facts are, and go along the line of, "You don't have physical evidence." No, really. I'm not even exaggerating.

Mr Cook is claiming that SEC filings, legal documents, corporate statements, internal documents, IRS tax records, etc. don't count as 'physical evidence.' He also wants you to believe this evidence would not stand up in court so, therefore, climate change isn't real. Among these documents is a leaked memo from the American Institute of Petroleum which revealed detailed plans to "recruit, train, and pay willing scientists to sow doubt about climate change among the media and the public. Cook would have you believe this isn't evidence.

I'm sorry, Russell, your logic is a major failure. But, that's not new. That's what happens when you're paid to lie about climate change. And, yes, he's paid to lie about climate change. By his own admission, he has been receiving yearly grants from the Heartland Institute. Heartland is an anti-science organization funded, in part, by the fossil fuel and tobacco industries to undermine science to prevent legislative actions that would harm their clients. Heartland, and it's subordinates such as Russell Cook, have never been able to produce any scientific evidence to support their claims or to produce any science that can credibly undermine the accepted science concerning manmade climate change.

What he did in his blog was to make a full confession and publish it as a public statement that he is funded by an anti-science organization, which is itself funded by the fossil fuel and tobacco industries to undermine science for the sake of their clients. What he accomplished was to confess that he is a paid shill to undermine climate science. In his parlance, this is admissible in court and I screen grabbed his confession before he had a chance to remove it. And, the 'poor, old, pitiful me' ploy does not change anything. He cannot go into court and claim he is not a paid shill because he got paid a "meager" amount. And, the 'no-strings' claim won't fly either. He has, by his own admission, received the funding for a number of years. This also shows a pattern of behavior and indicates the funding was given to him on a quid pro quo basis. In other words, the funding was provided as a reward for his efforts in regards to Heartland's mission. Again, this is admissible in court. So, yes, he confessed to being a paid shill.


With this notice, the reader is informed he/she will have no defense of “innocent mistake” made because of lack of knowledge and may have legal liability for defamation.

The reason I like this is because Mr. Cook tried to intimidate me with the threat of a lawsuit. When I stood up to him he quickly backed down and claimed he wasn't threatening me. And yet, here he is making a blanket threat of legal actions against anyone that says something he doesn't like. There is a definite pattern of behavior. As before, he is trying to intimidate people by threatening to take legal action. This is what is known as evidence of behavior and, in his parlance, is admissible in court. I've been on record for a long time on this issue and I renew my statement - I look forward to any of the anti-science people, including Russell Cook, taking me to court. I would really like to get them on the witness stand. What fun that would be.

An editorial by Tom Harris has a number of interesting comments by this troll. What is interesting is to see how I got a shout-out from Cook. The editorial is Climate change in presidential debates and here's a screen shot of Cook's comments. 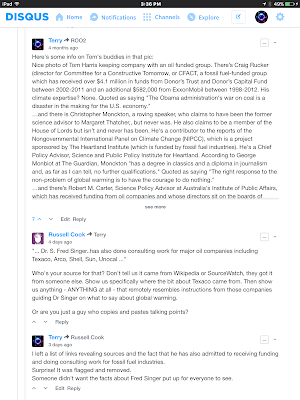 Cook's statements are very much alike. If he doesn't like it, he merely says it doesn't count and he continues on his way. He's kind of like Danae in the comic strip Non Sequitur.

Hey, if he says it's true, it must be true. Right? Except for one thing, he never provides any scientific evidence to support his claims, even though he has frequently been invited to do so. Cook's method is to merely mince words without adding any meaning or value to them. This is the definition of being a troll. Then, he flags comments which go counter to his claims and gets them removed. This results in the need for people to take screen shots to catch him at it.


So, the record is there. Russell Cook has confessed to being a paid shill. He's also shown he's a troll with no credibility. So, why am I even bothering with him? Because, people like Cook and Tom Harris go around saying we have a 'moral obligation' to help people affected by climate change, but then work to convince people there is no climate change and we shouldn't do anything about it. They take payment to block action on this serious issue and allow the human suffering to continue. People are free to believe what they want, but they also have a right to know about the messengers and what their motivations are. Deniers frequently complain that scientists only produce results that will get their funding renewed. This is not only a false claim (there are plenty of organizations that would fund any effort that could show climate change is not real), but they will also turn around and claim the fact they are paid by the fossil fuel industry is not relevant. That is why I bother with people like Russell Cook.

But, he's not all bad. He likes my blog.
Posted by Dialogues on Global Warming at 5:29 AM No comments: