I received the second challenge to my $10,000 Global Warming Skeptic Challenge. As usual, I quote the submission verbatim:

I respectfully submit the findings of Dr. Christian Schlüchter’s discovery of 4,000-year-old chunks of wood at the leading edge of a Swiss glacier. Here is an article that summarizes the research...

Here is his interview on why, "Our society is fundamentally dishonest." Translated from German to English by Google Translator...

Additional questions for you to answer.

1. Can you explain why the Rhone glacier has been ice-free for 5,800 of the last 10,000 years, according to Dr. Christian Schlüchter’s research?

2. Can you explain why the Rhone glacier was ice-free before human industrial influence? Which is the very period of time that global-warming alarmist's point to as the proverbial smoking gun to prove their point.

I am not submitting these findings for a prize. I ask only that YOU refute Dr. Christian Schlüchter’s work with an absolute certainty in this matter. If you can't, as I suspect you won't be able, then concede this, there is NO definitive right or wrong in this case and PUBLICLY accept that your OPINION may not be the correct one. I reverse your challenge, I don't want your money, I want you to take out a full-page ad in either the NY Times or LA Times admitting that you lost this challenge.

Let me summarize the article and what is claimed to be proof against man made global warming. Dr. Christian Schluchter (sorry, I can't do the umlats in his name) found some wood at the base of a glacier. The wood is dated as being 4000 years old and is believed to be left over from before the glacier covered the area. Glaciers move things, but also sometimes just cover things up and leave them in place. Either way, this wood shows that somewhere that is currently covered with the glacier was ice free 4000 years ago.  The article is also filled with all sorts of innuendo that has nothing to do with the science involved. If Dr. Schluchter became 'a target of scorn,' as the article states, it was probably because he was taking old news and trying to make the case that it was some new major discovery. This would be kind of like someone saying they discovered gravity and then being convinced they were targeted because no one was listening.

I would like to say I'm sorry to disappoint you, but I'm not even a little disappointed. I am more likely to take out the ad you mentioned to proclaim that deniers have failed to prove their point. Your submission fails the scientific method proof standard (why is that so hard when the deniers all claim it is simple?). Here are the issues with your submission.

There is most certainly a right answer and science is not an opinion. You accept it and understand it, or you reject it. A common characteristic of deniers is the way they reject science. Its unfortunate. We could be spending our time and effort addressing this problem if it wasn't for people like you.


Failure #1: The article you reference is something of an embarrassment - for the author not for scientists. Take a look at this plot to see why: 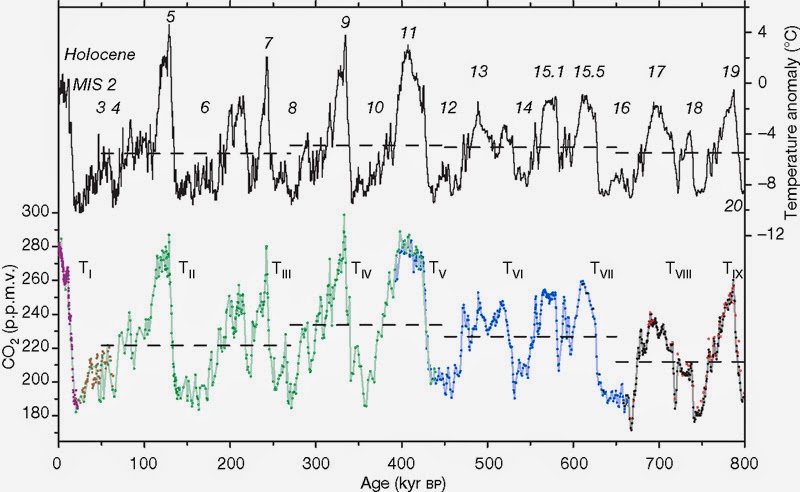 This is a plot showing global temperature and CO2 levels for the last 800,000 years (today is on  the left). The most obvious thing that just jumps right out is that there has been variation in the climate. Dr. Schluchter's discovery probably didn't make any news because that is something that is well known. Climate changes over time and there are natural cycles.

The reason this is a failure is because no one, not in this article or anywhere else, has ever shown a connection between natural cycles and what is being observed today. What deniers are doing is saying there are natural cycles, therefore it is a foregone conclusion that today's warming trend is a natural cycle. This is a false argument and there is even a name for it. It is called the fallacy of four terms. This is the argument made about cycles by deniers:


Again, there is no connection between the first and the second. There are other ways for people to die than just pneumonia.

Here is the real problem with the claims made in this article: We are in a naturally occurring cool cycle, not a warm one. All warming (above the average) in the current trend is man made and it would be much worse if not for the natural cooling cycle.

To directly answer your two questions, I do not refute any of Dr. Schluchter's work, just any conclusion that this shows global warming is not real. The reason why this particular glacial area (and many others) was ice free at some point in the past is because the climate changes in a natural manner. This fact does not detract at all from the data that shows we have changed the climate today with our emissions.

Now, if you, or Dr. Schluchter, or anyone else, could show that today's warming trend is a result of natural cycles, then that would be news.

Until then, this proof is shown to be false. In fact, it doesn't even satisfy the requirements of the $1000 challenge, either.

Don't feel too bad. This is the most common argument made by deniers today. It really shows just how little homework they do. They simply pick out some inflammatory article on the web and take it as proof of their beliefs without checking up on it. It sounds good, therefore it must be good. Funny how that works because that is, itself, a false argument.
Posted by Dialogues on Global Warming at 8:35 AM