Our favorite fossil fuel paid shill, Tom Harris, who is very active in promoting the failing coal industry, has stated, in a response to Dave James,


James demonstrates one of the ways that the climate debate is being poisoned: attack the messenger with logical fallacies (James seems to like the straw man fallacy as he often says that I favor de-regulation of coal, for example, when I have repeatedly explained that I do not (there is a big difference between promoting deregulation and promoting the cancellation of stupid regulations such as regulating carbon dioxide emissions)). 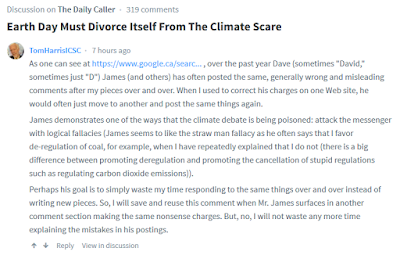 So, Tom Harris has stated he is not advocating for deregulation of the coal industry, he merely wants to remove the regulations. I wonder if that statement actually makes sense to even him?

The part of this that is distasteful is that Harris never discusses why we have regulations on coal in the first place. And, he apparently doesn't care. He only wants to promote his employers and help them make even more obscene profits, no matter what the cost. And, the cost is considerable.

Take a look at this article in Science News, When coal replaces a cleaner energy source, health is on the line. The article is a discussion of the paper Impacts of nuclear plant shutdown on coal-fired power generation and infant health in the Tennessee Valley in the 1980s, which appeared in the journal Nature Energy. The paper concerns a study of a period in the 1980s when the Tennessee Valley Authority (TVA) shut down a couple of nuclear power plants and replaced them with coal-fired plants. This was done as a result of the nuclear accident at the Three Mile Island nuclear facility. One plant, Paradise Fossil Plant, increased it's electrical production by about 27%. An increase in air pollution was a natural consequence. A study found that babies born near the plant 18 months after the increase had about 5% lower birth rate compared to babies born in the same area 18 months before the increase. There was no discernible change in other areas that did not experience an increase in fossil fuel emissions. As the article points out, lower birth weight is linked to trouble later in life, including a lower IQ, lower earnings and health problems, particularly heart disease. To put it in context, the extra emissions can be compared to a pregnant woman smoking a pack of cigarettes a day.

Harris and his friends in the fossil fuel industry don't seem to care. But don't worry. They aren't advocating for deregulation. They only want to remove the government regulations. You know, those "stupid regulation" that limit the particulate pollution, the sulfur-dioxide pollution, the mercury emissions, the arsenic discharges, etc.

Posted by Dialogues on Global Warming at 3:56 AM