Being involved in the public forum on climate change brings a requirement to listen to any number of crazies. Normally, climate change deniers have some foothold in reality and are probably perfectly sane. Then, there are the ones you really have to wonder about. You would like to think even the science-hating crowd realizes these people are wacko, but I have found, unfortunately, that misery loves company. Seldom is someone so bad that even the science haters shut them out.

Let me give you some examples. Here are some comments posted on an article that appeared on the CFACT webpage. The article is quite bizarre by itself. Granted, CFACT is a true voodoo group of people with very twisted ideas of reality, but it's still surprising to read some of the comments appearing there. It is a trip worthy of H.P. Lovecraft. This exchange, for instance:

Okay. I was going to give a list of sources, but this one is so stupid. It's one thing to give the typical science-hater's false and deceptive arguments. But, to state there is no science at all is to take a permanent detour into the land of the irrational. Here's a search for 'science of climate change.' Take a look at how many hits it produced. 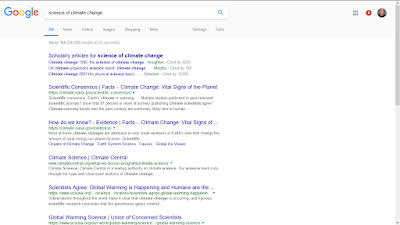 Once again, you read that correctly. 366,000,000 hits. That's right - three hundred and sixty-six million hits! Oh, and these guys want to tell you that there is no science supporting climate change.

I can hear the deniers already - 'Well, that's only two guys. That doesn't prove anything."

So, who cares? Clearly, these guys are so far gone that there is no way to reach them, so it isn't even worth the effort to try. Yeah, these three twits (and the others who believe in CFACT) are morons and the only people who are going to read their comments on CFACT and think they're credible are also morons. But, take a look at the article written by this guy. This is why I care. Some of these morons get bigger venues. Someone might actually believe this twit knows what he's talking about.

Ed Berry is a wacked-out physicist who spends time making anti-science claims and uses his Ph.D. as a proof that he's right. He isn't and he has been called out on a regular basis, including by me. Based on his comments, I have to conclude he is not rational. But, people will still listen to him.

So, let's take a quick look at how invalid this latest piece of his is.

Berry's claim is that climate change is not possible because it violates Einstein's equivalence principle. Right away, he demonstrates how invalid his claim is because he uses the principle in an incorrect manner. For those of you who may not be familiar with it, the equivalence principle states that gravity cannot be distinguished from acceleration, a key concept in his general theory of relativity. For instance, if you mysteriously woke up in a sealed room and the gravity was the same as before, you could not tell, by any experiment within the confines of the room, that you are on Earth and not in a spaceship accelerating at one earth-gravity of acceleration. But, that isn't what Berry says.

The Equivalence Principle says if data cannot distinguish between two things, then the two things are identical.

And, then it gets worse.

He goes on to make the claim that the IPCC is stating manmade CO2 is treated by nature differently than naturally-caused CO2.

This is a false statement, in and of itself. It is not IPCC's fundamental hypothesis and no one, that I'm aware of, is claiming manmade CO2 emissions are treated differently by nature. CO2 from burning fossil fuels, and other manmade sources, goes into the big mix and is cycled around just like naturally produced CO2. The issue is that this manmade production is overwhelming the ability of the natural environment to remove CO2 - any CO2 - from the atmosphere. The natural system has limits and we have exceeded those limits. Atmospheric CO2 levels are increasing as a result of exceeding nature's limits, not because manmade CO2 is treated differently.

But, in reality, CO2 coming from fossil fuel burning IS different than natural CO2. The isotopic ratio is different, which is how we know manmade emissions are responsible for increasing CO2 levels. So, the data really can distinguish between the two.

This is how laughable Berry is. His claim is that we can't tell one CO2 source from another, therefore the equivalence principle applies. Not only is his application of the EP wrong, but you can, in fact, tell the difference between one source of CO2 and the other.

In other words, his entire claim is false!

But, you know what? People will still believe him. And, that's the sad truth.

Posted by Dialogues on Global Warming at 11:41 AM