Voodude: The World Is Cooling

I have been having a lively debate with a commenter on one of my recent postings. You can read it all here. This particular commenter, Voodude, claims the world is cooling, not warming. He gives all sorts of arguments to support his claim, including graphs. Let me present some of his arguments and address them for scientific accuracy.

As a note, Voodude has all of the traits of a troll, probably even a paid troll. It is the job of a troll to tie up bloggers and disseminate massive amounts of contrary misinformation, particularly cartoons and bad graphs. Voodude fits the profile precisely.

UPDATE: If someone prefers to remain anonymous, that's their business. But, I really don't like people being anonymous trolls and going around engaged in denial tactics. That is why I went to the trouble to find out who Voodude is. He is Brian Marple Mulder of Alberta, Canada. There is a lot more on him, but I just wanted to prevent him from being a coward hiding behind a computer screen.

The world is cooling, not warming.


This was Voodude's claim and some of the graphs he supplied. I will provide my response below. 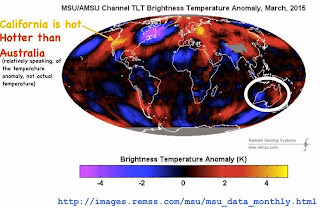 The white areas have no anomalous temperature, they are normal. The blue-ish areas are COOLER THAN NORMAL. 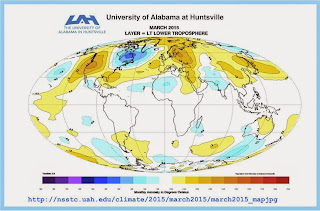 Voodude
There are more normal+cool areas, than there are, hot areas.

Let's start with the easiest ones first, the last two graphs he provided. His line of reasoning is that the combined area of the cool areas and the neutral areas are greater than the warming areas, therefore the planet is experiencing global cooling, not global warming.

First, let me say this is so ridiculous a claim that this is where I first suspected he was a paid troll. Why would someone make a claim this obviously fraudulent? Why do I call it fraudulent? Just consider the meaning of 'neutral.' It means it falls in neither group. So, you cannot group the neutral areas as being part of the cooling trend. As a counter argument, I would be equally justified in claiming, "The total of the neutral areas plus the warming areas is much greater than the cooling areas; therefore, global warming is real." That would be equally false. The correct interpretation of these two graphs is that the warming areas in both graphs is greater than the cooling areas in total extent.

Did Voodude really believe that horrible claim he made? I sure hope not. His profile on Disqus states he is an engineer. Since he remains anonymous, it is impossible to verify, but I seriously doubt it. By the way, why is Voodude so anonymous?

Let's look at his first two graphs, now. They are equally easy to debunk, but it is a little bit more involved. This issue here is the name at the top of the graph - Mr. Roy Spencer. If you ever use anything from Roy Spencer, it is an automatic given you're going to be wrong. One of his papers was submitted last summer for the Global Warming Skeptic Challenge. You can read about it, and him, here. There is an interesting article about his work in The Guardian.

Voodude tried to justify his graphs with this statement:


The fact is, I don't trust him (and neither should you). So, let's go to the website and see for ourselves. This is a really nice website built by Dr. Kevin Cowtan in the Department of Chemistry at the University of York. Thank you, Professor, for this excellent site.

Once you go there, you can select the data you want and the time period. Let's try to replicate Voodude's claims and compare them to Spencer's graphs above. He said there was a cooling trend over the last 17 years and he only used the land data. This is what I get using the Berkeley land data for the period of 1999 to 2015:


Oops! The graph shows a warming trend of .168 degrees Celsius per decade. No cooling trend here. Maybe he meant to use the NOAA data:

Okay, we've already busted this claim all to heck and Roy Spencer's claims along with it, but why stop there? There is a major false argument deniers always go for, even though they know they are lying by doing so - they fail to include ocean warming which accounts for 93% of the planetary warming. This is what we get if we include the oceans in our calculations:

Including the oceans, we find there has been a warming trend of .144 degrees Celsius per decade over the selected time span.

We can safely say the Earth is not cooling and this claim is completely busted. But, there's more.

This is one of the most common false arguments used by deniers - picking the data that best produces the results desired. As scientists, it is our duty to examine all of the data and obtain the most correct result. As deniers, it is their job to manipulate the data to best obtain the predetermined result. Admittedly, they are pretty good at their job. Way too many people have fallen for this false argument. Certainly, Voodude has engaged in this very thing. Let's examine, again, his claim - the data from the last 17 years shows a cooling trend.

First question - Why did he go with 17 years? Normal cycles takes decades (manmade) or millennia (naturally occurring). Voodude never actually said this was a naturally occurring cooling trend, so we will consider both. In either case, 17 years is not enough to produce any valid conclusion. I can measure the global temperature in the Northern Hemisphere for the period of August through January and I'll get a cooling trend. That is an example of cherry picking. I selected August through January because I knew the seasonal change would show a cooling trend.

So, if 17 years is invalid, why did Voodude pick it? I'm at a bit of a loss because we already saw above there was no cooling trend during this time period - unless you use Roy Spencer data!

And, all the while, he rejected the use of ocean warming.

This is the very definition of cherry picking. What did Voodude have to say about this?


Voodude
I don't consider cherry picking to be applicable when the end of the data is current. If one picks a period, like, 1966-1968, both end-points "picked” ... then, that is cherry picking. But specifying one point, as in, a temperature series, while the other point is "now” ... that's a bit different. What, then, are the alternatives? If the end-point is “now”, either I pick the starting point, or you do... somebody has to pick the starting point... So, then, what is the point in labelling a data series (that has the current point at one end) "Cherry Picking”? The current month is taken as the starting point -no cherry picking- and the root-mean-square, linear regression analysis is computed, going back in time, as far as possible, such that the trend is COOLING. The slope, as returned by the linear regression analysis, is negative. Some temperature time-series do not support any cooling at all. If the data supports the conclusion, then IT IS COOLING. You may argue about the length of the trend, as many are short; or about the statistical significance, because temperature series tend not to be significant, but if the data support the conclusion, IT IS COOLING.


His argument is, if he uses today as his end point, he can use any point he wishes and it isn't cherry picking. But, isn't cherry picking defined as using the period you want? Even if he is using today as one endpoint, he is still selecting the period so it will fit his desired results. So, he has sidestepped the very question and issue and fails to address how he used a very specifically selected time period, data set and ignored the ocean warming.

When challenged on the science, Voodude threw out these two gems:


Voodude
Christopher said, of the IPCC, "However, it's evaluations and decisions are based on peer-reviewed science"
so
Where's the Science in this?
IPCC official, Ottmar Edenhofer, speaking in November 2010: “But one must say clearly that we redistribute, de facto, the world's wealth by climate policy. … one has to free oneself from the illusion that international climate policy is environmental policy. Instead, climate change policy is about how we redistribute, de facto, the world’s wealth…” "This has almost nothing to do with environmental policy, anymore.”
http://www.nzz.ch/aktuell/star...

Voodude
Christopher said, of the IPCC, "However, it's evaluations and decisions are based on peer-reviewed science"
so
Where's the Science in this?
”At a news conference [22Jan2015] in Brussels, Christiana Figueres, executive secretary of U.N.'s Framework Convention on Climate Change, admitted that the goal of environmental activists is not to save the world from ecological calamity, but to destroy capitalism.
"This is the first time in the history of mankind that we are setting ourselves the task of intentionally, within a defined period of time, to change the economic development model that has been reigning for at least 150 years, since the Industrial Revolution," she said.
Referring to a new international treaty environmentalists hope will be adopted at the Paris climate change conference later this year, she added: "This is probably the most difficult task we have ever given ourselves, which is to intentionally transform the economic development model for the first time in human history."
Investor's Business Daily: http://news.investors.com/ibd-...

The answer to Voodude's question in both cases is the same - there is no science in these quotes. So, why was he bringing them up? Simple, they are straw man arguments.

Voodude was making an argument that the world is cooling. What does either of these two quotes above have to do with that topic? If you can't find anything then we are in agreement. The fact is, Voodude threw these out in an attempt to divert attention to the fact he had no science to support his claims. This is a very common strategy among deniers - they have no science to support them, so they distract the audience with something else.

By the way, both of those quotes were taken out of context in an attempt to make them sound different than they were spoken. Of course, that is another false argument, but we'll leave that for another day. Here is a link to a site showing the full quotes.

There is little doubt in my mind Voodude is a paid hack for the denier lobby, probably the Heartland Institute. The reason I specifically mentioned that group of deniers is because we were engaged in a series of exchanges exposing Heartland, Tom Harris, and Russell Cook for the paid deniers they are when Mr. Voodude suddenly shows up.  The timing is especially suspicious with the appearance of Russell Cook who is known to attack climate scientists and climate science bloggers in attempts to intimidate them. Both Harris and Cook were getting beaten up rather badly and ran away, only to suddenly be replaced by Voodude. I can easily imagine Cook calling up Voodude and telling him he needed to tie up my blog.

So, if you come across Voodude, be warned about what he is. But, then again, since he refuses to reveal who he is, all he has to do is change his handle and appear as someone else.

But, isn't that what you would expect from someone who is afraid of the science?


Posted by Tales From The Travels at 8:00 AM

Tales From The Travels